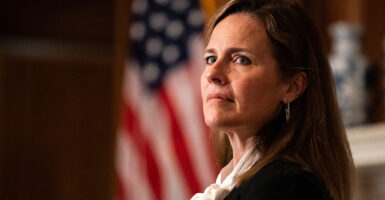 The Catholic mother of seven first came under fire for her Catholic faith at her 2017 confirmation hearings, when Democratic senators suggested that her beliefs might make her unfit to serve as a federal judge.

Barrett has faced renewed attacks on her faith ever since it became known that President Donald Trump was considering her for the vacancy, such as comedian Bill Maher saying she is a “f—–’ nut,” and “really, really Catholic—like speaking in tongues.”

And Maher isn’t alone in levying attacks against Barrett’s faith.

“Why is it that so many of us on this side have this very uncomfortable feeling that dogma and law are two different things, and I think whatever a religion is, it has its own dogma. The law is totally different,” Democratic California Sen. Dianne Feinstein told Barrett when she came before the Senate Judiciary Committee in September 2017.

“The conclusion one draws is that the dogma lives loudly within you,” Feinstein added. “And that’s of concern.”

Feinstein refused in late September to address whether she would question Barrett in this way again, saying, “I’m not going to go there,” according to CNN.

“Let’s wait until she’s nominated,” she said regarding how Democrats would handle Barrett’s nomination. Feinstein and other Senate Democrats on Thursday requested a delay in Barrett’s confirmation process.

Democratic Illinois Sen. Dick Durbin also questioned Barrett over an article she co-authored as a law student that included the term “Orthodox Catholic,” asking Barrett: “Do you consider yourself an Orthodox Catholic?”

“If you’re asking whether I’m a faithful Catholic, I am, although I would stress that my own personal church affiliation or my religious belief would not bear on the discharge of my duties as a judge,” Barrett told him.

Durbin told The Daily Caller News Foundation after the hearing that he prefaced his remarks by saying that “going into a person’s religion is not the right thing to do in every circumstance.”

“But she’s been outspoken,” he said. “As a law school professor at Notre Dame she has taken on the tough challenge of how a person with strong religious beliefs becomes a judge and looks at American law.”

“So I think she has fashioned herself somewhat of an expert and I didn’t feel uncomfortable asking that question,” Durbin added.

Democratic Hawaii Sen. Mazie Hirono raised Barrett’s “closely held views” on Wednesday, suggesting that these views may make Barrett unfit to serve on the Supreme Court. Hirono questioned “whether her closely held views can be separated from her ability to make objective, fair decisions”

SCHUMER TWO DAYS AGO: “Not a single Democrat will make these attacks or make personal religious beliefs an issue.”

HIRONO YESTERDAY: Not sure “whether her closely held [religious] views can be separated from her ability to make objective, fair decisions” pic.twitter.com/sSOJIi8aJN

“She has very closely held views that will impact a woman’s right to choose,” Hirono said September 26, “and certainly she has already expressed her willingness to vote down the Affordable Care Act as well as other Supreme Court precedents.”

Hirono previously raised Barrett’s Catholic views during her 2017 confirmation hearing and in 2019 harangued a Catholic judge for his membership in Knights of Columbus, a Catholic charity.

Disgraced former Democratic California Rep. Katie Hill tweeted September 22: “If her religion never made it into her court decisions, she can believe what she wants. But, yes, personally, I DO object to any religion that still insists women be subservient.”

Hill denied that criticisms of Barrett are stemming from anti-Catholic bias, calling this “ridiculous,” according to Politico.

“This isn’t about Catholicism,” Hill said. “This isn’t even about religion. This is about extremism.”

“Someone’s religion is important when their religious beliefs are part of the way they make decisions that come before that court,” Hill told The New York Times.

The former congresswoman said Barrett holds “anti-women, anti-L.G.B.T.Q. positions, which are rooted in her religion” and would play into “her decisions on the court.”

“Wait, why is this news? Isn’t this the standard position for any orthodox Catholic?” Hamid asked about a tweet saying that Barrett was a trustee at a Catholic school that opposed same-sex marriage and said homosexual acts are “at odds with Scripture.”

Hamid noted that Orthodox Muslims and Jews also share this belief, to which Rai replied, “True. I’d heavily prefer views like that not be elevated to SCOTUS, but unfortunately our current culture is relatively intolerant. It will be awhile before those types of beliefs are so taboo that they’re disqualifiers.”

Aunt Lydia’s character, The Atlantic reported, “emotionally, mentally, physically, and sexually tortured the handmaids in her care” by cutting out their eyes and tongues, sewing their mouths shut, and tasing them for offenses. The publication noted that Aunt Lydia “enjoys” these cruelties in the show.

“Under the circumstances I’m pretty calm, yknow while the living version of Aunt Lydia in the Handmaid’s Tale gets nominated to the Supreme Court to replace a woman who literally spent her life fighting for gender equity,” Omara tweeted September 25.

Under the circumstances I’m pretty calm, yknow while the living version of Aunt Lydia in the Handmaid’s Tale gets nominated to the Supreme Court to replace a woman who literally spent her life fighting for gender equity.

Amid reports that Barrett might be Trump’s choice to fill the Supreme Court vacancy, multiple news outlets falsely reported that the Catholic group People of Praise was the inspiration for “The Handmaid’s Tale” and highlighted Barrett’s reported connections with the group.

“Amy Barrett being Catholic is a good thing; Joe Biden is a Catholic too,” Williamson tweeted. “Republicans are trying to make it as though the Left is criticizing her Catholicism but it’s not true.”

“It’s the repressive tenets of the ‘People of Praise’ sect she belongs to that are genuinely concerning,” Williamson added.

People of Praise has not confirmed or denied Barrett’s membership, according to Reuters, ever since a 2017 New York Times article reported she was a member of the group.

“In suggesting a link between People of Praise and Margaret Atwood’s ‘The Handmaid’s Tale,’ the burden of proof clearly lies with the news outlet making such a claim,” the group’s communications director Sean Connolly told The Daily Caller News Foundation in late September.

“Bottom line: There has never been any evidence whatsoever to suggest that the Indiana-based People of Praise played a role in inspiring Margaret Atwood’s book,” he added. He did not address whether Barrett is a member of the group.

Diane Bray, a former Democratic candidate for the Colorado Senate, also likened Barrett to a character in “The Handmaid’s Tale.”

“Time to fight like hell or Handmaid’s Tale will be our reality,” she tweeted September 27. “Can’t wait to hear Amy Coney Barrett questioned on whether she ever had the role of ‘Handmaid’ in her People of Praise cult where women pledge subservience to men. You bet it’s relevant.”

Time to fight like hell or Handmaid’s Tale will be our reality.

Can’t wait to hear Amy Coney Barrett questioned on whether she ever had the role of “Handmaid” in her People of Praise cult where women pledge subservience to men.