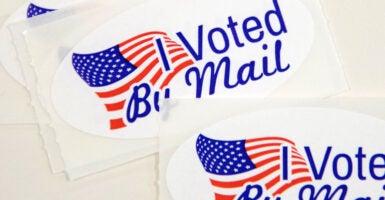 YouTube didn’t say it disputed any of the facts in The Heritage Foundation's video, which details problems with mail-in primary elections. Pictured: Stickers are ready to be stuffed into envelopes at the Mecklenburg County Board of Elections office Sept. 4 in Charlotte, North Carolina. (Photo: Logan Cyrus/AFP/Getty Images)

YouTube has posted a disclaimer to a video produced by The Heritage Foundation that warns of the potential problems of  mass voting by mail.

YouTube didn’t say it disputed any of the facts in the video, which was posted Sept. 2 and details recent problems with mail-in primary elections. The video cites mainstream media reporting and the U.S. Election Assistance Commission on ballots sent back to voters as “undelivered, misdelivered or reported missing.”

However, YouTube posted a disclaimer below the video citing information from the Bipartisan Policy Center that it labels as “Context.”

“This is unfair and ill-informed censorship by YouTube,” Hans von Spakovsky, manager of the Election Law Reform Initiative at The Heritage Foundation, told The Daily Signal.

Similarly, YouTube added the same “context” disclaimer to at least two other Heritage videos. One features von Spakovsky in a Newsmax interview about an FBI investigation of mai-in ballots in Pennsylvania; the other includes audio in which von Spakovsky talks about potential disenfranchisement as a result of mail-in ballots.

YouTube previously removed another video produced in 2017 by The Daily Signal, in which Dr. Michelle Cretella, a pediatrician and executive director of the American College of Pediatricians, talked about gender reassignment surgery. The Daily Signal is the multimedia news organization of The Heritage Foundation.

The Bipartisan Policy Center cited by YouTube is a “left-leaning think tank,” according to the Capital Research Center, a conservative-leaning watchdog group that monitors nonprofits.

The center’s board of directors includes Henry Cisneros, secretary of housing and urban development during the Clinton administration, and Maria Contreras-Sweet, head of the Small Business Administration during the Obama administration.

It also includes liberal Republicans such as former Sen. Olympia Snowe of Maine and former Republican National Committee Chairman Michael Steele, who has been a vocal critic of his party and President Donald Trump in recent years.

Von Spakovsky, a senior legal fellow at Heritage who is a former member of the Federal Election Commission, said he does not view the Bipartisan Policy Center as actually bipartisan.

“Alongside the consistent enforcement of our policies, we’re continuing to raise up authoritative voices and reduce harmful misinformation,” the YouTube blog says, adding:

One of the ways we do this is through our information panels, which provide relevant context alongside content. For example, in 2018, we started to show information panels linking to third-party sources around a small number of well-established topics that are subject to misinformation, such as the moon landing or COVID-19.

We’re expanding this list of topics to include voting by mail. This means that under videos that discuss voting by mail, you’ll see an information panel directing you to authoritative information from the Bipartisan Policy Center, a bipartisan think tank.

This report was updated Oct. 1 to include YouTube’s response to a request for comment and to note that YouTube also added the “context” disclaimer to at least two other Heritage Foundation videos.