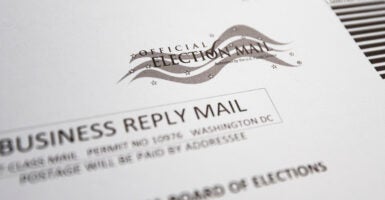 Multiple voters who live in New York City have reported errors—including a wrong name on their ballot envelope—which would invalidate their ballots. (Photo: Bill Clark/CQ-Roll Call, Inc via Getty Images)

New York City residents have reported receiving ballots with wrong information, sparking confusion and a response from the city board of elections department.

Multiple voters who live in Brooklyn have reported errors—including a wrong name on their ballot envelope—which would invalidate their ballots, according to Gothamist. The error was due to an “outside vendor error,” the New York City Board of Elections said Monday in a tweet instructing residents on what steps to take if they encounter the error.

“I just got my New York mail-in ballot today and the security envelope I’m supposed to put it in and sign has some other guy’s name and address on it,” Nathan McDermott, a CNN reporter and Brooklyn resident, tweeted Monday.

He added: “I’m a political journalist, so I pay a bit more attention to this than the average voter needs to, but the wrong address isn’t readily noticeable, so I imagine most voters won’t even register it.”

I just got my New York mail-in ballot today and the security envelope I’m supposed to put it in and sign has some other guy’s name and address on it.

Gothamist is already reporting other cases, so this is looking to be a widespread problem.https://t.co/lSF3abIXTB pic.twitter.com/4uWmNOwwRW

Several voters responded to an earlier Board of Elections tweet, complaining that they were experiencing the same issue that McDermott tweeted about.

“Also received an envelope with someone else’s name. I spoke to someone at the Brooklyn office who genuinely sounded shocked and panicked when I told her the issue. I was rushed off the phone,” John DePasquale, a New York City middle school teacher, tweeted in response.

If a voter were to sign the mistaken envelope, the ballot would be invalidated, according to city law, Gothamist reported. Voters living in at least nine different Brooklyn neighborhoods have reported the error.

The Board of Elections doesn’t know the extent of the issue, Michael Ryan, the department’s executive director, said in a statement to The Daily Caller News Foundation. About 500,000 ballots have already been sent out to New York City voters, according to Gothamist.

Ryan added that the city’s vendor tasked with making the ballots, Phoenix Graphics, will address the issue and that voters with invalid ballots will receive corrected ones.

The reported issues come weeks before the Nov. 3 election, which will see more mail-in voting than years past. A record 76% of Americans will be able to vote by mail in the general election, The New York Times reported.

President Donald Trump has opposed universal mail-in voting and has said that the election will be more susceptible to fraud. He floated the idea of delaying the election in July, but later backtracked.

Nearly 50% of voters believe mail-in voting is susceptible to fraud, according to a July poll.