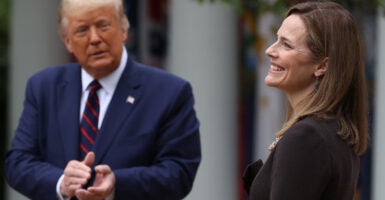 Amy Coney Barrett, President Donald Trump’s third nominee for the Supreme Court, will become the fifth woman to serve on the high court if the Senate confirms her to fill the seat of the late Justice Ruth Bader Ginsburg. Pictured: Trump introduces Barrett on Saturday evening in the Rose Garden of the White House. (Photo: (Photo: Chip Somodevilla/Getty Images)

“Today it is my honor to nominate one of our nation’s most brilliant and gifted legal minds to the Supreme Court,” Trump told an audience in the Rose Garden of the White House shortly after 5 p.m., with Barrett at his side.

“You are very eminently qualified for this job,” Trump said, turning to Barrett. “You are going to be fantastic.”

If confirmed by the Senate, Barrett will become the fifth woman ever to serve on the Supreme Court in filling the seat of Justice Ruth Bader Ginsburg, who died Sept. 18.

Trump’s choice would give the high court a clear conservative majority of 6-3 if Barrett joins Justices Brett Kavanaugh, Neil Gorsuch, Clarence Thomas, and Samuel Alito along with Chief Justice John Roberts. Ginsburg was a pillar of the court’s liberal wing, along with Justices Stephen G. Breyer, Sonia Sotomayor, and Elena Kagan.

“Should I be confirmed, I will be mindful of who came before me,” Barrett said in remarks outside the White House. “The flag of the United States is still flying at half-staff in memory of Justice Ruth Bader Ginsberg to mark the end of a great American life.”

Barrett honored the legacy of the late justice as a female trailblazer in the legal profession who “smashed” glass ceilings.

His nominee will make history herself if confirmed, Trump said, becoming “the first mother of school-age children ever to serve on the U.S. Supreme Court.”

The crowd of about 150 stood and cheered when the president first announced Barrett’s name.

Conservatives anticipate that Barrett, at 48, could remain on the Supreme Court for at least three decades.

Trump has said for about a week that he would name a woman to the high court, and that he had narrowed his choice to four or five women. Barrett, who Trump had considered for the nomination that went to Kavanaugh in 2018, was anticipated to be his top choice for this vacancy.

Barrett officially accepted the president’s nomination in the Rose Garden. Her husband, Jesse Barrett, and their seven children were present as she thanked the president and addressed the nation.

“The president has asked me to become the ninth justice, and as it happens, I am used to being in a group of nine,” Barrett said to laughter.

The president’s nominee stressed her commitment to the Constitution, attributing her judicial philosophy to her former boss, the late Supreme Court Justice Antonin Scalia.

“A judge must apply the law as written,” Barrett said in remarks lasting about seven minutes. “Judges are not policymakers, and they must be resolute in setting aside any policy views they might hold.”

She noted that Ginsburg, whom she honored, and Scalia, a mentor, formed a close if unlikely friendship on the high court.

The president called Barrett’s own judicial record “beyond reproach,” and added that “this should be a straightforward and prompt confirmation.”

In remarks lasting about 10 minutes, Trump also asked lawmakers and the media to “refrain from personal or partisan attacks” on Barrett.

Addressing fellow Americans, Barrett said she has “no illusions that the road ahead of me will be easy, either for the short term or the long haul.”

She will meet the challenges with “humility and courage,” she pledged.

Speaking to reporters about 6:45 p.m. before departing the White House for Pennsylvania, Trump said he thought the Senate would confirm Barrett before the election.

During Barrett’s 2017 confirmation hearing for the 7th Circuit seat before the Senate Judiciary Committee, Sen. Dianne Feinstein, D-Calif., the panel’s ranking member, questioned her about her Catholic faith, saying “the dogma lives loudly within you.”

Barrett assured the senator: “It’s never appropriate for a judge to impose that judge’s personal convictions, whether they arise from faith or anywhere else, on the law.”

Barrett attended University of Notre Dame Law School, where she met her future husband, on a full-tuition scholarship. She graduated first in her class in 1997.

The oldest of seven children herself, Barrett’s seven children range in age from 8 to 19.  Two of the children were adopted from Haiti; the Barretts’ youngest, Benjamin, has special needs.

Barrett was on Trump’s list of potential Supreme Court picks in 2018 to fill the seat left by retiring Justice Anthony Kennedy. The president interviewed her, but opted for Kavanaugh.

Eleven days after his inauguration in January 2017, the president announced Gorsuch, then a 10th Circuit judge, as his choice to fill the seat vacated in February 2016 by the unexpected death of Scalia. The Senate confirmed Gorsuch by a vote of 54-45.

In 2018, the president nominated Kavanaugh to the high court to fill the seat of a mentor, Kennedy. The Senate confirmed Kavanaugh 50-48 after long and contentious hearings in which Democrats accused him of drunken sexual misconduct in prep school and college.

Memories of the left’s three-month character assault against Kavanaugh are fresh in the minds of many Americans, Barrett’s supporters observe.

“The Democrats are going to highlight any issue, anywhere in American life, to try to say the kind of BS about Amy Barrett that they’ve tried to say,” Sen. Ben Sasse, R-Neb., told NBC News on Thursday in anticipation of Barrett’s nomination.

“They’re going to throw crap at the wall, see what sticks, and then make it 10 times more extreme,” Sasse said.

Democrats already have implied they may use another impeachment of Trump as a tool to keep the Senate from confirming his nominee before the election.

Standing with Senate Minority Leader Chuck Schumer, D-N.Y., Rep. Alexandria Ocasio-Cortez, D-N.Y., told reporters last Sunday that “these are procedures and decisions that are largely up to House Democratic leadership.”

“But I believe that, also, we must consider, again, all of the tools available to our disposal and that all of these options should be entertained and on the table,” Ocasio-Cortez said.

House Speaker Nancy Pelosi, D-Calif., last Sunday echoed Ocasio-Cortez on ABC News’ “This Week” when asked whether she would consider impeaching the president a second time.

“We have our options,” Pelosi said. “We have arrows in our quiver that I’m not about to discuss.”

In a statement after news of Ginsburg’s death broke, Senate Majority Leader Mitch McConnell, R-Ky., vowed to call a vote on the Senate floor to confirm Trump’s nominee to the high court.

Politico reported Sen. John Kennedy, R-La., as agreeing with McConnell’s commitment by saying: “There’s going to be plenty of time, plenty of time for both the nominee and the [Judiciary] Committee for questions, plenty of time to vote. I’m not worried about the timing.”

Republicans are expected to have the votes needed to confirm Barrett to the high court. So far, only two of the Senate’s 53 GOP members, Lisa Murkowski of Alaska and Susan Collins of Maine, have raised concerns about acting before the election.

Conservative leaders have been vocal in their support for Barrett, praising her impressive legal career and traditional values.

“She deserves a vote as expeditiously as possible,” Jeanne Mancini, president of March for Life, said in a formal statement Saturday. “Amy Coney Barrett certainly has the support of pro-life Americans who know, perhaps better than anyone else, the danger of activist judges.”

Heritage Foundation President Kay C. James applauded the president’s pick in a statement after the announcement Saturday, saying that Trump “joins many former presidents in making an election-year nomination.”

James challenged senators not to be “cowed into giving up their constitutional power of advice and consent in response to political threats.”

Sasse, a member of the Judiciary Committee, said those on the left are threatened by Barrett because, unlike her, they want “judges who will substitute their own will for the law.”

“Judge Barrett is not that kind of judge,” he said.

Feinstein, also on the Judiciary Committee, criticized the choice directly following the announcement that Barrett will be Trump’s nominee.

“She would push the Supreme Court further to the right, putting many rights and protections that the American people have fought for and deeply cherish at risk,” the California Democrat tweeted.

In his own tweet, Schumer likened a vote for Barrett to “a vote to eliminate health care for millions.”

Sen. Lindsey Graham, R-S.C., chairman of the Judiciary Committee, tweeted that Barrett is “highly qualified in all the areas that matter–character, integrity, intellect, and judicial disposition.”

“Judge Barrett has a proven record as a jurist who judges according to what the Constitution says, not according to opinion or preference,” said former Arkansas Gov. Mike Huckabee, a past Republican presidential candidate who is honorary chairman of the group My Faith Votes.

The Rev. Samuel Rodriguez, president of the National Hispanic Christian Leadership Conference, said that with Barrett’s nomination, Trump “is building a judicial firewall around our Constitution.”

“I would be pressed to find a more fitting candidate,” Rodriguez said.  “Once again, President Trump has exceeded our expectations by nominating a judge committed to the original intent of the Constitution.”

Ken McIntyre contributed to this report, which has been updated since publication to include more details of the announcement and reaction.