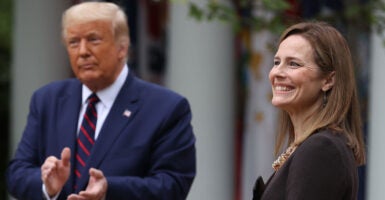 The Heritage Foundation announced Saturday the launch of a campaign in support of Judge Amy Coney Barrett’s confirmation to the Supreme Court.

The initiative, Take a Stand for the Supreme Court, is powered by FreeRoots. The platform provides users with an opportunity to sign a petition, post messages to social media, and tell U.S. senators to confirm Barrett “without delay.”

President Donald Trump nominated Barrett in a White House ceremony Saturday evening. If confirmed by the Senate, she would fill the seat vacated by Justice Ruth Bader Ginsburg, who died Sept. 18 at age 87.

Senate Majority Leader Mitch McConnell and Senate Judiciary Chairman Lindsey Graham, R-S.C., have indicated that they will hold hearings in the coming weeks.

“The Supreme Court needs justices committed to faithfully interpreting the law with the U.S. Constitution as their guide,” James said. “At this pivotal point in our nation’s history, Judge Barrett is the right person for the job. She is a committed originalist with sterling credentials, a brilliant legal mind, and a steel backbone. Every American should not only support her nomination, but celebrate it.”

Heritage decided to partner with FreeRoots to provide Americans with a way to make their voice heard.

FreeRoots, according to its website, was created “to empower everyone who cares about a public policy issue to engage in grassroots action and make their views known.”