How Our Suburbs Are Under Attack From Illegal Immigrant ‘Sanctuary’ Laws 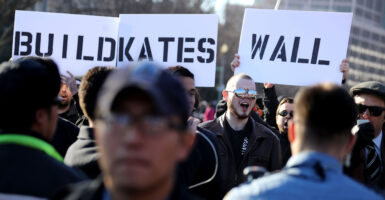 The rationale for cities and counties to provide "sanctuary" for illegal aliens falls apart under closer examination. Pictured: Opponents of illegal immigration rally in front of the White House Dec. 3, 2017, in response to the acquittal of an illegal Mexican immigrant in the 2015 shooting death of Kate Steinle in San Francisco. (Photo: Chip Somodevilla/Getty Images)

America’s suburbs have become a political football this year on the question of whether the federal government should mandate low-income housing in suburban neighborhoods.

While that debate will continue to rage, far less attention is being paid to a problem that has been destroying the suburbs for several years. That would be the proliferation of so-called sanctuary laws that shield dangerous illegal aliens from deportation.

Liberal politicians sell sanctuary laws to the public as a great benefit to their communities. If we obstruct federal immigration authorities in their mission to deport those here illegally, they say, we will have a safer, more welcoming community.

They also say that immigrants will have less fear of law enforcement and, therefore, will be more willing to alert police and act as witnesses to criminal acts.

All of those claims are demonstrably false.

Sanctuary laws serve as a beacon to attract aliens with criminal records and violent tendencies. Jose Inez Garcia Zarate, the five-times deported Mexican national whose actions resulted in the death of Kate Steinle on a San Francisco pier in 2015, told authorities he settled in the city because he was aware of its permissive sanctuary laws.

Others with bad intentions have similarly taken notice. America’s worst sanctuary communities have a growing presence of violent gangs, such as MS-13, that recruit heavily among immigrant populations.

Did the gangs select those communities by coincidence, or did they realize that sanctuary laws would allow them to commit rape, murder, drug trafficking, and other crimes with a buffer of protection from immigration enforcement?

Aside from the fact that many victims of crimes committed by illegal aliens are other illegal aliens, the claim that sanctuary laws breed greater immigrant cooperation with police is faulty. Immigration and Customs Enforcement simply does not apprehend or deport anyone who gives it a tip on a criminal alien.

In fact, the federal government specifically protects people in this circumstance. The U visa safeguards victims of certain crimes and those who are helpful to law enforcement in the investigation of criminal activity.

Shame on liberal politicians who blatantly lie to illegal aliens in their communities and stoke fear that cooperation with law enforcement will lead to their deportation.

The disgraceful records of these sanctuary laws are just now being exposed to sunlight. My organization, the Immigration Reform Law Institute, recently conducted an investigation into Fairfax County, Virginia, a wealthy and historically low-crime suburb of the nation’s capital.

Even though Fairfax County claims to be nonsanctuary, the results say otherwise.

We found that between 2018 and 2020, the county refused to honor more than 900 requests from Immigration and Customs Enforcement to detain criminal illegal aliens held in county jails.

That means that more than 900 people charged with criminal offenses, who have no legal right to be here and should have been deported back to their homelands, were released back into the community while they were facing criminal charges.

In what way does that make the community safer?

County and city officials around the country have resorted to creative tactics to thwart ICE while denying they are sanctuary communities. In Fairfax County, officials require ICE to produce a criminal warrant signed by a judge or else they will not honor ICE detainer requests.

There’s one problem there. Immigration is a civil, not criminal, matter. Our immigration law provides no process for ICE to obtain a criminal warrant and Fairfax County knows it.

The county’s policy is a cynical political move that allows it to claim to residents that it cooperates (or would do so if ICE acted right), but for all practical purposes, it doesn’t.

Our immigration law clearly authorizes immigration officers to issue detainer requests accompanied by civil arrest warrants. And that practice has been upheld as legal by courts nationwide.

The fact that Fairfax County will not honor these requests and chooses the interests of criminal aliens over lawful residents is shameful.

Last month, the Immigration Reform Law Institute investigated another capital area jurisdiction, Montgomery County, Maryland. We found that, while ICE asks for at least a 48-hour hold on aliens when it files a detainer request, the county was giving it as little as 28 minutes’ notice.

Such short notice is equivalent to no notice at all.

The tactics may vary, but the outcome is the same: Dangerous people here illegally and arrested for crimes are put back on the streets by opportunistic politicians who think that sanctuary policies will win them the loyalties of the immigrant voting bloc.

Those who value safety in their communities need to reject sanctuary laws and any office-seeker who advocates for them.