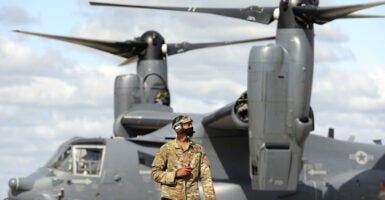 A serviceman of the U.S. Air Force stands in front of a Bell V-22 Osprey tiltrotor during the joint military drills of the Special Operations Forces of the Ukrainian Armed Forces and the U.S. Army Europe in Vinnytsia, Ukraine. (Photo: Evgen Kotenko/Ukrinform /Barcroft Media/Getty Images)

Dakota Wood is a senior research fellow in The Heritage Foundation’s Center for National Defense and the editor of Heritage’s “Index of U.S. Military Strength. Previously, he served for two decades in the U.S. Marine Corp.

In his major speech on foreign policy and national security while campaigning for the presidency, candidate Donald Trump noted that “[h]istory shows that when America is not prepared is when the danger is greatest. We want to deter, avoid, and prevent conflict through our unquestioned military strength.”

He then reported the condition of America’s military, comparing it with similar conditions at other points in our nation’s history:

When Ronald Reagan left office, our Navy had 592 ships. When Barack Obama took office, it had 285 ships. Today, the Navy has just 276 ships.

The average Air Force aircraft is 27 years-old. We have 2nd generation B-52 bombers—their fathers flew the same plane.

Our ship count is below the minimum of 308 that the Navy says is needed to execute its current missions.

I retired from military service three months after sequestration took effect. Four years later, I returned to the Department and I have been shocked by what I’ve seen with our readiness to fight. For all the heartache caused by the loss of our troops during these wars, no enemy in the field has done more to harm the readiness of our military than sequestration…

It took us years to get into this situation. It will require years of stable budgets and increased funding to get out of it.

No doubt realizing that substantial increases in defense spending were unlikely, Mattis focused on making sure that the military we had was at least prepared for combat.

He prioritized “current lethality” over everything else while continuing to push for increased spending on modernization to replace worn-out equipment with equipment capable of winning in battle against the likes of China or Russia. Expansion of the force was essentially placed on hold.

The current U.S. military remains near historically low levels of capacity, and this is especially worrisome because numbers really do matter in war.

Though individual items of equipment outmatch those of our competitors—the F-22 Raptor, B-2 Spirit, and Arleigh Burke-class destroyer, for example, are qualitatively better than similar platforms fielded by Russia or China—each platform or piece of equipment can be deployed to only one place at a time.

A military that is small in numbers therefore has a limited ability to address numerous threats in many places at once, regardless of how qualitatively good the force is. Numerical shortages could be offset by the contributions of allies, but America’s partners have underinvested in their militaries even more so than has the U.S. since the end of the Cold War.

Progress is being made to improve the material and readiness condition of the military, but years of neglect will not be corrected overnight, and security threats that were not challenged in the past will be harder to correct now that they have matured.

Four years ago, then-President Barack Obama signed the multinational Joint Comprehensive Plan of Action, the so-called Iran nuclear deal that froze Iran’s program but did nothing to dismantle its nuclear infrastructure or to prevent it from developing the missiles that would carry nuclear weapons if Iran ever decided to restart its program (something it was allowed to do after 10 years anyway under the agreement).

Worse, the nuclear deal returned over $100 billion to Iran, which it promptly used to support terrorist organizations and to improve its conventional military.

Four years ago, China was feverishly at work building islands in the South China Sea, dredging sand from the ocean to fill coral reef atolls. Once these manufactured islands were stabilized, it built runways and buildings, installed radars, and then set out to militarize them to extend its military reach to support the exertion of its national claims to highly contested international waters.

Nearly four years ago, in January 2016, North Korea tested what it claimed was a hydrogen bomb. Eight months later, it announced that it had successfully tested a warhead that could fit atop a long-range missile. A year after that, it reported another hydrogen bomb test.

Four years ago, The Heritage Foundation assessed the U.S. military as “marginal” in its ability to defend the country and its interests and tending toward “weak” after years of underinvestment, poor execution of modernization programs, and the disastrous effects of budget sequestration, all while the military was heavily engaged in combat operations in the Middle East and South Asia.

During the past four years, the military service chiefs, senior defense officials, and some members of Congress repeatedly raised the alarm that the world was growing more challenging as advanced technologies and the military systems and weapons they enable proliferated in ways that made America’s competitors more capable and challengers behaved more forcefully in regions stretching from the Arctic, through Europe and the Middle East, to the South and East China Seas.

During this time, the U.S. military—approaching half the size it was during the Cold War—struggled to sustain the operations it was tasked to execute with equipment that continued to age, modernization programs that were hobbled by volatile and limited annual defense budgets, and a workforce that ran itself ragged “getting the job done” anyway.

The president’s National Security Strategy and the National Defense Strategy published by Mattis acknowledged this situation and pledged to begin a much-needed rebuild of the military.

Mattis was correct in focusing his most immediate attention on fixing what could be fixed with the resources at hand—the lethality and competence of the current force—while making the case to Congress that lasting improvement could come only through a consistent, methodical, long-term reinvestment in the capabilities, modernization, and expansion of the military.

Over the past year or two, the services have reported improvements in unit readiness thanks to increases in funding pursuant to bipartisan budget agreements that leveraged the overseas contingency operations account option to bypass Budget Control Act limits on defense spending, but the Budget Control Act remains in force through fiscal year 2021.

If America is to have a military that is able to defend its interests globally, the Trump administration and Congress will have to work together to provide continued relief to the Department of Defense, especially now that some operational demands have been reduced, and find a way to increase defense spending at the recommended rate of 3% to 5% above the rate of inflation.

Though the U.S. military currently can overmatch any single competitor, it would operate at significant risk in defending U.S. interests against more than one.

The rise of China, Russia, Iran, and a nuclear-armed North Korea presents geographically dispersed challenges of increasingly advanced capabilities that the current U.S. military would be extraordinarily hard-pressed to counter if called upon to act in more than one region.

Add to this the persistent challenge posed by multiple terrorist groups actively destabilizing key regions, and the U.S. military is hard-pressed to fulfill its primary function: defending the United States and its interests.