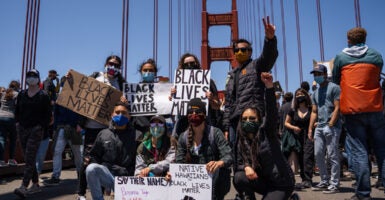 And the newspaper appears to be doing the same in America today by covering for the all-too-obvious Marxist roots of the Black Lives Matter organizations.

My essay stated that one of the three founders of the main Black Lives Matter organization, Alicia Garza, had partnered with a left-wing San Francisco group that has been known to carry water for China: the Chinese Progressive Association-San Francisco.

The New York Times headlined its report “No, a Black Lives Matter Co-Founder Didn’t Partner With a Pro-Communist Chinese Group.” Its main contention was that my essay “conflated two nonprofits with the same name.”

The Times report went on to say that “a cursory search of tax records” revealed that it was the Chinese Progressive Association in Boston, which it portrayed as an unrelated entity, that supported China’s interests. The San Francisco CPA, which fiscally supports Garza’s Black Futures Lab, had no ties with communist China, it said.

The Times report then derided conservatives it said have been trying to tie Black Lives Matter to communist groups for years, saying, “There’s no indication that today’s Black Lives Matter movement has any formal link to Marxism, or to the Chinese Communist Party.”

The “source” was yet another “fact-checker,” PolitiFact, which earlier this year said: “Black Lives Matter has grown into a national anti-racism movement broadly supported by Americans, few of whom would identify themselves as Marxist.”

The Times writer, technology columnist Kevin Roose, decried that my essay had had such an impact through social media, seeming to suggest that only reports by him and fellow Times staffers and comrades elsewhere in legacy media should get air time.

Yes, the San Francisco and Boston versions of the Chinese Progressive Association were founded by the same militant Marxist outfit, and their leaders, together with those of the New York CPA, collaborate though membership in leftist networks.

And yes, Americans do rightly support the sentiment that black lives matter. However, by and large they do not know that Garza and other founders of the Black Lives Matter organizations are committed Marxists.

In fact, over the weekend, Black Lives Matter outfits have been busy airbrushing Marxist statements out of their websites. Lavrentiy Beria, Stalin’s notorious secret police chief, would have been proud.

Perhaps Roose’s review of the record should have been less “cursory.”

The Chinese Progressive Association was founded in San Francisco in 1972 by I Wor Kuen, a radical Marxist group started in 1969 that wanted to prepare the residents of New York City’s Chinatown for “revolution.”

Many of the group’s individual founders, such as Pam Tau Lee, Fay Wong, and Wilma Chan, were members of I Wor Kuen or its successor organization, the League of Revolutionary Struggle.

“We were going to become a part of the U.S. revolution and our role would be to help link up what was going on in our communities with the overall picture,” Lee, also a founder of I Wor Kuen, said in a long interview published in 2003 by University of California, Berkeley.

The “overall picture” for Lee was clear from what she said about the communist revolution in China and capitalism:

We enabled people to celebrate the revolution in China and understand about socialism and learn about the difference between different political systems, and how capitalism here in the United States was really not working for poor people and for poor people in ghettos, like Chinatown. It was screwing them over, in fact. So you know, I did stuff like that.

Then in ‘73, I helped open an organization called the Chinese Progressive Association, which I would ten years later be the chairperson of for many, many years. But our organization, the I Wor Kuen, was like the seeds of the opening of this mass organization.

An authoritative 2009 Stanford University paper tracing the Chinese Progressive Association’s early days in San Francisco to the present, and which can be found on Marxists.org, concurs:

The CPA began as a Leftist, pro-People’s Republic of China organization, promoting awareness of mainland China’s revolutionary thought and workers’ rights, and dedicated to self-determination, community control, and ‘serving the people.’

[The CPA] worked with other pro-PRC groups within the U.S. and San Francisco Bay Area. … Support for the PRC was based on the inspiration the members drew from what they saw as a successful grassroots model that presented a viable alternative to Western capitalism.

One of the ways the Chinese Progressive Association did this was by holding “film screenings that were open to the public, sometimes showing Chinese films as well to facilitate understanding of the country’s revolutionary ideas,” the Stanford paper said. “CPA also took the lead with groups such as the U.S.-China People’s Friendship Organization to celebrate China’s National Day on Oct. 1.”

New Zealand filmmaker and researcher Trevor Loudon, writing in The Epoch Times (a U.S.-based newspaper affiliated with the Falun Gong faith group, which is harshly persecuted in China), said San Francisco’s Chinese Progressive Association is a “Maoist-influenced group” that works “to push the Beijing line in Chinatown.”

The founders of Boston’s Chinese Progressive Association, Loudon says, “were mainly members of I Wor Kuen.” In an email to me, he included not only Lowe but Michael Liu and Suzanne Lee.

“The CPA has nationwide ambitions,” Loudon adds. In the 1970s, he says, “I Wor Kuen established the Chinese Progressive Association, with branches in San Francisco, Boston, and New York. These organizations used ethnic pride, racial grievance, and Chinese nationalism to draw thousands of young Chinese-Americans into the revolutionary pro-Beijing orbit.”

All these spinoffs are registered and run separately, but they collaborate through their membership in hard-left networks. Many of the chapters work together in a nationwide network called Grassroots Asians Rising. Among others, it includes the Chinese Progressive Association in San Francisco; New York City’s CAAAV: Organizing Asian Communities and DRUM—South Asian Organizing Center; Philadelphia’s Asian Americans United; and Portland’s Asian Pacific American Network of Oregon.

In addition, the Chinese Progressive Association offshoots coordinate through the membership of their leaders in LeftRoots, an organization of hard-left groups.

Lowe and Pam Tau Lee, co-founders of the Boston and San Francisco groups, respectively, are both members of LeftRoots (in fact they are identified as “cadre”). They co-wrote a paper that served as a “starting point” for another document that strategized about revolution.

To this day, the various Chinese Progressive Associations continue at times to partner with entities in China or to serve the interests of the People’s Republic of China. In my earlier essay, for example, I detailed what the Boston organization has done with the communist Chinese government.

Alex Tom founded the China Education and Exposure Program in 2012, while he was executive director of the Chinese Progressive Association in San Francisco.

According to a Left Forum bio: “In 2012, Alex, along with other Asian activists and organizers, formed the China Education and Exposure Program (CEEP) to build a deeper analysis of China for U.S. progressives and leftists and to build relationships with the grassroots movement in China.”

The aim of Tom’s group seems to be to build ties between American leftists and the most leftist elements in China.

In 2017, the Chinese Progressive Association in San Francisco also helped create, along with other pro-China groups, an organization called End National Security Scapegoating, which sought to curb Department of Justice investigations of China for spying under the pretext that it amounts to “racial profiling.”

That it teamed up with the group Chinese for Affirmative Action demonstrates that the Chinese Progressive Association doesn’t work in the interest of Chinese Americans, one of the groups most adversely affected by racial preferences in education.

And the Chinese Progressive Association of San Francisco went to bat for China again this past May. Along with the Boston group and others, it signed a letter backing the Joe Biden campaign, but warning the campaign not to engage in “China-bashing,” adding that “fanning anti-China sentiment will also come at a cost at the ballot box.”

In my earlier piece, I quoted an essay last year that Lowe, of the Chinese Progressive Association in Boston, authored with other radicals for LeftRoots. In it, they advocated that Asians play a role in creating a “revolutionary strategy” to achieve a “fundamentally different society.”

It is clear, then, that both the Boston and San Francisco versions of the Chinese Progressive Association work at times to push the agenda of China’s communist government here in the United States, and that both chapters are praised regularly by China’s state-owned mouthpieces.

It is clear, too, from this perspective, why the Chinese Progressive Association would sponsor a new enterprise by Black Lives Matter’s Garza: They espouse the same desire for world communism.

This should be clear to the Times’ Roose from what Garza and her outfits say. Garza sits atop a worldwide revolutionary empire, starting with the Black Lives Matter Global Network Foundation that she started, which now has 15 chapters in the U.S. and more in Canada, Australia, and Europe. Garza is also behind the Movement for Black Lives, with its 50 domestic organizations.

The Black Lives Matter Global Network Foundation was busily removing Marxist language from its website Monday. The Post Millennial, a media site, reported: “Black Lives Matter removed a section of text that had been under a section called ‘What We Believe’ that sought to engender the destruction, or perhaps reimagining, of the nuclear family structure.”

The communist term “comrades” also has been airbrushed out.

Maybe Roose ought to spend his time at The New York Times chasing down why organizations that have destabilized this country for months now partner with other groups that push China’s agenda, instead of wistfully wishing social media were closed to those who do this job.