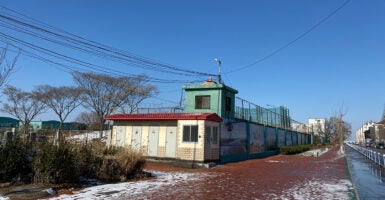 The Qingdao Taekwang Shoes Co. factory in Laixi, China, pictured here on Jan. 8, 2020—the side where the Uighur workers enter and exit, and live in dorms—looks almost like a prison. There are watchtowers with cameras pointed in all directions and high barbed wire fences atop the walls. (Photo: Anna Fifield/The Washington Post via Getty Images)

Federal agents seized a 13-ton shipment of human hair in July based on evidence the hair was taken from innocent people detained in Chinese internment camps.

This was just the beginning of the Department of Homeland Security’s efforts to protect U.S. citizens from unknowingly funding China’s human rights abuses. Acting Deputy Secretary of Homeland Security Ken Cuccinelli argues, “Americans don’t want to be complicit in this immorality.”

China’s campaign of forced labor has been widely exposed and documented over the past year, and the U.S. government is now taking concrete efforts to address it.

On Monday, Customs and Border Protection issued withhold release orders on four Chinese companies and a Communist Party subsidiary that are known to use forced labor. The orders block any products made by these entities from entering the United States.

[These products] all come from the Xinjiang province … where the Uighur Muslims are held in concentration camps, literally between 1 and 3 million of them, and forced to perform the labor on these products to produce them. And so, when we generate enough evidence to identify what companies are using this slave labor—because that’s what it is, slave labor—we block those products.

The Chinese government defends its internment camps by calling them “vocational educational training centers.” Yet, Cuccinelli refuses to live in China’s fantasy land. He knows what this is—a campaign by the Chinese government to financially profit from its human rights abuses.

“What it really is, is a concentration camp, and they farm out their laborers to other companies to do work. And we issued WROs to those other companies already, CBP did earlier in the year,” Cuccinelli continued. “So, this has been a very aggressive acceleration in enforcement actions to put pressure on China to stop its concentration camp policies, its human rights abuses in Xinjiang province. And really to set these people free.”

The U.S. government is now refusing to play a role in China’s human rights violations, and that means something.

Congress is also looking to address this issue. The Uyghur Forced Labor Prevention Act, introduced in both the House and Senate, would require corporations that manufacture goods in Xinjiang to prove with “clear and convincing evidence” that no forced labor was used in their creation before the products may be imported to the U.S.

In doing so, it protects American corporations and consumers from unintentionally funding China’s brutal human rights abuses against the Uighur people. In Family Research Council’s view, this is an effective way of dealing with these human rights and religious freedom abuses.

For American companies that have not already stopped doing business in Xinjiang, it’s a wake-up call. The administration is taking our policies against forced labor seriously, and now is the time to ensure that goods are produced ethically.

We put out a business advisory with respect to doing business in the Xinjiang province and we put American businesses on notice and businesses around the world that if you want to keep importing into the United States, you really need to disentangle yourself from these slave labor practices. And businesses have begun to respond. That doesn’t mean they all have, but the ones that are slow on their feet are going to find their products seized at U.S. ports if they don’t make the adjustments needed to avoid entangling themselves from a business standpoint with Xinjiang slave labor.

The measures taken by the CBP and DHS are effective because they put an economic price tag on China’s use of forced labor from Uighurs who are detained simply due to their ethnicity and religion. They also protect American consumers who do not wish to contribute to human rights violations anywhere in the world.

The withhold release orders are an important first step to addressing the complex issue of forced labor in China. The U.S. should continue to work to see the day when Beijing can no longer profit from its abuses.