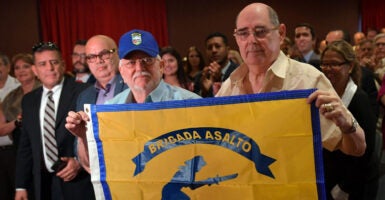 The audience waits for President Donald Trump at the Manuel Artime Theater in Miami, Florida, June 16, 2017. Assault Brigade 2506 was the group of Cuban exiles that invaded the Bay of Pigs, Cuba, April 17, 1961. (Photo: Mandel Ngan/AFP/Getty Images)

President Donald Trump nonchalantly tweeted, “Miami Cubans gave me the highly honored Bay of Pigs Award for all I have done for our great Cuban Population,” over the weekend, driving many in the media to frantically attempt to discredit the accolade.

Instead of recognizing the sacrifice of those who participated in the Bay of Pigs, all former prisoners of war, anti-Trump media forces went after the president for supposedly exaggerating the token of their support.

Journalists rage-tweeted at Trump for hours, but did not commemorate the 1,500 brave Cuban volunteers who signed up to liberate Cuba from Fidel Castro’s communist revolutionaries. In the end, Castro’s forces slaughtered over 100 volunteers and imprisoned another 1,113 for 20 months.

While journalists frequently attack Trump over nonsense, the leftist bias against Cuban Americans, especially conservatives, drove this latest round.

My colleague at The Heritage Foundation, Mike Gonzalez, has often written about why the left and media figures attack Cubans in a way they never would any other ethnic group.

One reason is that the left’s fanaticism with Castro has produced generations of educated liberal elites, including journalists, who parrot regime talking points with far too much zeal. Fidel slaughtered gays and his political opponents, yet progressives still idealize the bearded communist.

Leading feminist media voices stay silent while the Ladies in White, a Cuban opposition movement founded by the wives and other female relatives of jailed dissidents, endure regular beatings by state security.

Instead of holding Cuba accountable, many in the media, like Reuters’ Sarah Marsh, take the intellectually lazy approach of highlighting their health care system, ignorant of the fact they’re endorsing state-sponsored human trafficking.

Much like the over-used trope “conservatives pounce,” those of us against the murderous, unelected dictatorship are dishonestly labeled Cold War “hard-liners.”

A similarly offensive term for Venezuelans seeking a legitimate government or Iranians wishing an end to the mullahs would be intolerable.

Yet, even when confronted by Cuban Americans with facts about their experiences under communism and the similarities with modern-day progressive policies, leftist media commentators like Ana Navarro will dismiss them as “crazy.”

Outlets like the Miami Herald, whose editorial board recently proclaimed, “you’re either anti-racist or a menace to society,” do not see the irony in their long history of constantly slamming conservative Cuban Americans.

During the 2016 presidential primary, the Herald’s columnist, Fabiola Santiago, attacked conservative Cuban American Sens. Ted Cruz and Marco Rubio, saying they sounded like a “cubano arrepentido, a denier of your heritage.”

She unfairly attacked politicians like Florida Lt. Gov. Jeanette Núñez for “forgetting the meaning of the accent, ‘tilde,’ in their names,” and called Cuban American Trump supporters racists and “Cuban supremacists.”

Every leftist editorial posing as analysis leaves me that much more grateful for the fact-based writings of people like National Review’s Jay Nordlinger and The Wall Street Journal’s Mary O’Grady.

The left can’t stand how Cuban Americans break liberal stereotypes and governing principles. Our success after only five decades in the country disproves its claim that America is systemically unfair and racist.

Legacy media and progressives along the Acela corridor might not have a basis for comparison, but our loved ones in Cuba live as second-class citizens where food is a privilege and government dissent is persecuted.

Despite progressives’ massive investments to capture our vote, we remain largely conservative and unwilling to sacrifice our liberty.

As a member of this group, the bigots used to annoy me. I now relish the left’s attacks—it means we’re still an influential force. Criticize us all you want but please respect those who participated in the Bay of Pigs.