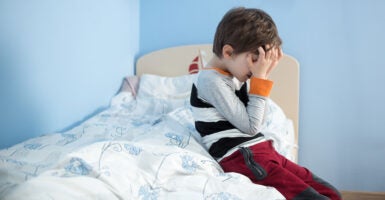 One critic of a new California state law says, "The problem is that it isn’t about teenagers having sex. It’s about adults exploiting minors sexually and being legally protected in doing so.” (Photo: Djedzura/iStock /Getty Images Plus)

The California Legislature has passed legislation that could pave the way for children to be subjected to sexual abuse or exploitation while their abusers suffer few consequences.

Senate Bill 145—which passed both the state Assembly and Senate, and Gov. Gavin Newsom just signed into law—ensures that adults will not automatically be placed on the sex offender registry even if they engage in sexual acts with minors aged 14 to 17, regardless of what kind of sex they had.

According to the law’s text, SB 145 will “exempt from mandatory registration under the act a person convicted of certain offenses involving minors if the person is not more than 10 years older than the minor and if that offense is the only one requiring the person to register.”

Under preexisting California law, a person convicted of a sex crime must register with law enforcement as a sex offender. The law currently treats cases of statutory rape differently: If a young adult and a minor have vaginal intercourse, judges can decide whether or not the convicted criminal winds up on the sex offender registry.

So, even though it is illegal in California for any adult to have sex with a person under 17, this law will require judges to take each case separately.

State Sen. Scott Wiener, D-San Francisco, is the far-left lawmaker who introduced the legislation. In 2017, he co-sponsored a bill to remove the felony penalty for knowingly exposing another person to HIV.

His defense for the new law, which fails to protect minors, was under the guise of discrimination.

“Senate Bill 145 is an anti-discrimination law,” Wiener said in a tweet. “It ends discrimination against LGBTQ people on the sex offender registry. The bill has been the subject of a massive misinformation campaign.”

In an interview, Wiener used the example of two boyfriends who were 19 and 17 to illustrate his point. “But if it’s a 19-year-old boy having sex with a 17-year-old boyfriend, the judge must put that 19-year-old onto the sex offender registry, even if it was completely consensual, even if they were boyfriends, even if there was nothing coercive or predatory about it.”

Wiener’s example is, unfortunately, far too narrow. In an article at The Federalist on this topic, my colleague Chad Felix Greene pinpointed the biggest issue with the legislation.

“The problem is that it isn’t about teenagers having sex. It’s about adults exploiting minors sexually and being legally protected in doing so. What possible justification would there be for a 24-year-old to have sex with a 15-year-old of either sex?,” he said, adding:

“The rational answer, of course, is there is none. Rather than addressing this reasonable concern, however, left-wing and LGBT sites decided opposition was homophobic and hateful.”

While I don’t agree with some headlines that proclaimed Wiener’s bill will “legalize pedophilia,” the AP reported recently, the law does seem to offer cover, intentionally or not, for adults up to age 27 to have any kind of sex with someone age 17 (or a 24-year-old to have sex with a 14-year-old) without being labeled a sex offender.

“Any law that lessens protections for vulnerable children is a bad idea. There’s a word for adults who pursue sex with children: pedophiles,” James Dobson, founder of Focus on the Family, said in a statement. “Any proposed legislation that gives incentive or cover for such depravity should be condemned, not passed into law.”

As a mother of four, I don’t think Dobson is overreacting.

It’s not clear why a politician should concern himself with what kind of sex any adults are having with minors and fabricate reasons to justify or lessen the punishment for this type of abuse.

It’s also unclear how a law like this, which weakens punitive measures against adults who would take advantage of young people sexually, is beneficial to anyone in California—regardless of whether it actually functioned as an anti-discrimination law.

Even under that premise, this law will surely damage teenagers on the cusp of adulthood, as adults of the same sex would be able to rape or abuse them and possibly avoid serious repercussions like being labeled as a sex criminal.

I’m disappointed California lawmakers passed the bill and that Newsom signed it into law. It fails to protect the state’s young people, while offering few benefits for the residents of California.