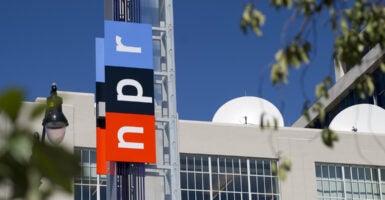 As regular listeners of National Public Radio know, the taxpayer-funded outlet regularly disparages the idea that any type of fraud occurs in our elections. Now, research by the Public Interest Legal Foundation has turned up information pointing to possible election fraud by NPR employees.

Many types of election fraud occur. The type found in the NPR case, instances of which appear in The Heritage Foundation’s Election Fraud Database, concerns individuals who violate eligibility rules by registering and voting where they don’t actually live.

The Public Interest Legal Foundation found four individuals who claimed NPR West headquarters in Culver City, California, as their residence and voted in 2018 via mail-in absentee ballots. More on that startling discovery in a bit.

When you register to vote, you are required by state law to register at your residential address, whether it is a home, an apartment, or a homeless shelter. You cannot register where you work and certainly not at other commercial addresses such as your local UPS Store, since your eligibility as a voter is tied to your residence and all of the local, state, and federal elected officials who represent that geographic area.

You basically are cheating the system and your fellow voters if you vote in races you are not entitled to vote in when you register somewhere other than where you live.

Rep. Steve Watkins, R-Kan., recently discovered that, no doubt to his chagrin, when he was charged with felony voter fraud for claiming a UPS Store as his residence when he registered to vote (and then voted) in a 2019 municipal election in Topeka, Kansas.

Can this type of fraud make a difference? Of course it can.

In 2012, a city council election in Vernon, California, was decided by a margin of four votes. A court overturned the election after it found that five individuals who were not residents of Vernon had voted.

When another court overturned the mayor’s race in Miami, Florida, in 1997 because of widespread absentee ballot fraud, the court noted illegal votes cast by registered voters who were not residents of the city.

California’s secretary of state explains in instructions for the voter registration form that individuals registering to vote in California must do so at their home address. Which brings us back to the NPR West headquarters building at 9909 Jefferson Blvd. in Culver City, California.

The Public Interest Legal Foundation, in looking at California’s voter registration and voting history records in conjunction with matching nonresidential addresses, found four individuals who claimed NPR West headquarters as their residence and voted in the November 2018 elections via absentee mail-in ballots.

Neither Beristain’s name appears in a search of the NPR website, and their affiliations with the left-leaning public broadcaster aren’t clear.

Kahn is listed as an international correspondent based in Mexico City. Her biography says she files reports for the NPR programs “All Things Considered,” “Morning Edition,” and “Weekend Edition.”

Sastry is listed as an associate producer at WAMU (88.5), the NPR station owned by American University in Washington, D.C., for the program “It’s Been a Minute With Sam Sanders.” Her biography says she previously worked for “All Things Considered,” too, which is one of NPR’s major news programs.

But according to the voter registration form that Sastry had to have completed under oath when she registered to vote, she lives 2,680 miles away from the nation’s capital at the NPR West building in Culver City.

All things actually considered, the question arises of whether the Beristains, Kahn, and Sastry engaged in the same type of behavior that led to Watkins being charged with voter fraud. In fact, NPR published a partner station’s report on Watkins in July in a story headlined “Kansas Rep. Steve Watkins Charged With Felonies Over Voter Registration at UPS Store.”

The Public Interest Legal Foundation’s findings on NPR stem from a newly unveiled research tool that allows the election watchdog to collect and audit the nation’s voter registration files. It’s called the SAVE Database.

And for those who claim that we don’t need to worry about noncitizens taking advantage of our honor system by registering and voting illegally in our elections, consider that the U.S. Attorney Matthew G.T. Martin of the Middle District of North Carolina just brought criminal charges against another 19 aliens for allegedly illegally registering and voting in the 2016 presidential election.

As the charging documents set forth, the alleged conduct violates three different provisions of federal law, one a misdemeanor and two felonies:

Making a false statement on a voter registration form—such as claiming that a commercial building where you work is actually your residence—violates Section 1015 (f), a felony punishable by a maximum of five years’ imprisonment and a fine of up to $250,000, or both.

Think this is an isolated problem in North Carolina? In 2018, U.S. Attorney Robert Higdon of the Eastern District of North Carolina brought criminal charges against 19 other illegal aliens for allegedly doing exactly the same thing: illegally registering and voting in the 2016 election.

And Georgia’s secretary of state just reported that his office found 1,000 registered voters who voted twice in the state’s June primary, once with absentee ballots and again in person on Election Day.

The numbers just keep adding up. Election integrity is something the public takes seriously, and prosecutors and election officials should, too.

Unfortunately, too many in the media (including NPR, it seems), in academia, and in the political halls of Washington and state capitols aren’t serious about clean and fair elections.

Editor’s note: NPR did not respond by publication time to an emailed request for comment.