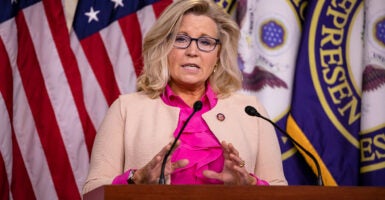 Rep. Liz Cheney, R- Wyo., asked the Department of Justice in September to investigate whether Russia and China are working to infiltrate environmental groups to influence U.S. environmental policy, The Daily Caller News Foundation has learned.

Russia and China may be infiltrating nongovernmental groups in an attempt to meddle in domestic energy and environmental policy, Cheney wrote in a Sept. 4 letter to Attorney General William Barr obtained by The Daily Caller News Foundation. The Republican lawmaker said in the letter that Russia had in the past worked to spread anti-fracking propaganda inside the United States.

Environmental groups’ willingness to “espouse views that align with those of our adversaries—makes it all the more critical that the Department is aware of any potential foreign influence within or targeting these groups,” Cheney wrote, noting that they are also “major contributors to U.S. political campaigns and have filed hundreds of lawsuits against the Trump Administration.”

“Environmental groups such as the Sierra Club and the National Resources Defense Council, whose anti-fracking agendas align with the Kremlin’s, are low-hanging fruit for Russian influence,” Cheney wrote.

“It’s crucial for the Department of Justice to determine whether these foreign adversaries are working to influence U.S. environmental and energy policies, including by infiltrating or targeting these environmental NGOs,” Cheney said in a statement to The Daily Caller News Foundation.

Cheney also expressed concern about Chinese influence. Republican members of the House Natural Resources Committee noted in 2018 that the Natural Resources Defense Council often praises the Chinese Communist Party’s environmental initiatives and promotes the idea of China as a global environmental leader, she wrote, citing comments from her House colleagues.

“The NRDC maintains a presence in China and has long worked with CCP officials,” Cheney wrote.

The Office of the Director of National Intelligence confirmed in a 2017 report presenting evidence of Russian intelligence attempts to meddle in the 2016 presidential election that Russian-controlled media outlet RT attacked U.S. fracking for oil and natural gas.

Office of the Director of National Intelligence officials said RT had run “anti-fracking programming, highlighting environmental issues and the impacts on public health.”

“This is likely reflective of the Russian Government’s concern about the impact of fracking and US natural gas production on the global energy market and the potential challenges to Gazprom’s profitability,” The Office of the Director of National Intelligence said in the report.

The DOJ has not responded to The Daily Caller News Foundation’s request for comment about a potential investigation. Neither the Sierra Club nor the Natural Resources Defense Council, both of which were explicitly named in Cheney’s letter, have responded to requests for comment about the Republican’s claims.