3 Arguments on How the Constitution Treated Slavery 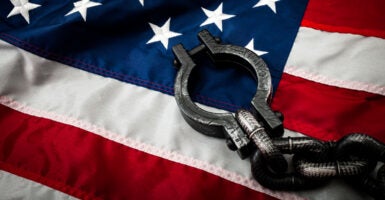 Was our founding document protective, antagonistic, or neutral toward slavery? Here are three arguments that will be examined during a Preserve the Constitution event to be held Sept. 29 by The Heritage Foundation. (Photo: Moussa81/Getty Images)

Alexander Phipps is an administrative and research assistant in The Heritage Foundation's Institute for Constitutional Government.

The 13th Amendment abolished the evil institution of slavery in 1865, but debate continues over the relationship between slavery and the Constitution in 1789 and afterward.

Was our founding document protective, antagonistic, or neutral toward slavery?

Here are three arguments that will be examined during a Preserve the Constitution event to be held Sept. 29 by The Heritage Foundation and called “Slavery and the Constitution.”

The original Constitution did not expressly forbid slavery, as it did with respect to bills of attainder and ex post facto laws. Like the dog that did not bark, that omission is significant because on July 4, 1776, no state outlawed the practice of slavery, and numerous states permitted it to exist.

Moreover, several different clauses in the original Constitution—the Three-Fifths, Slave Trade, and Militia clauses of Article I, along with the Fugitive Slave Clause of Article IV—implicitly, albeit circuitously, protected the interests of slaveholders.

The Founders omitted words such as “slave” or “slavery” only to shroud their hypocrisy, according to this argument. After all, how could they espouse the values of liberty and equality in the Declaration of Independence while also allowing slavery to persist for another 76 years?

Figures such as abolitionist William Lloyd Garrison saw through that deception, decrying the Constitution as an “infamous bargain” at odds with the declaration. In his equally infamous Dred Scott ruling, Chief Justice Roger Taney said that, when the Founders wrote “all men are created equal,” they meant only “all white men.”

According to this argument, that is why The New York Times’ 1619 Project argues that America’s “founding ideals were false” when they were written.

Argument No. 2: The Constitution was anti-slavery. This argument begins with the fact that, at the insistence of James Madison, who prepared the first draft, the Constitution did not expressly protect “property in people,” but did expressly safeguard “property in ideas.” That is, intellectual property, patents, and copyrights.

That omission is significant because, after seceding from the Union, the Southern states wrote their own constitution, which prohibited any “law denying or impairing the right of property” in slaves. The Southern states felt the need to make that protection explicit because the Constitution did not, and the moral underpinnings of the Declaration of Independence rejected the notion that anyone can have a “property” right in someone else.

Presidents John Quincy Adams and Abraham Lincoln saw it that way. In several places, the text of the Constitution also suggests antagonism toward slavery.

For instance, the Migration or Importation Clause allows Congress to ban the importation of slaves, and Congress did so at the first opportunity. The Preamble enumerates the purposes of the document, which includes, among other things, the need to “secure the Blessings of Liberty” for “We the People,” an inclusive locution that never mentions a distinction based on race or color.

The Fourth Amendment also protects “persons,” without limiting that protection to any particular race.

Argument No. 3: The Constitution was neutral regarding slavery, neither protecting nor outlawing it. The middle ground argument goes as follows:

The Constitution delicately omitted any explicit reference to slavery to avoid the implication that there could be “property in men,” but conceded its permissibility, with the hope that slavery eventually would become extinct. Although many Founders recognized the evil of the practice, they understood that the South would not adopt the Constitution if it explicitly forbade slavery.

Moreover, many lawmakers as well as other Americans firmly believed that slavery was an evil institution, and it might have died out on its own, for efficiency reasons, but for the later invention of the cotton gin.

All things considered, most of the framers of the Constitution reasoned that a union permitting states to allow slavery to exist temporarily was better than no union at all. This was because the Constitution established a federal government powerful enough to outlaw that practice when the time was right.

Withholding explicit judgment of slavery in the text of the Constitution was seen as a necessary—though temporary—compromise.