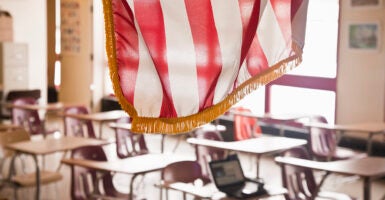 Mike Sabo, formerly a research assistant for the B. Kenneth Simon Center for Principles and Politics at The Heritage Foundation, is the editor of Real Clear Public Affairs: American Civics.

Entrepreneur and civil rights movement veteran Robert L. Woodson Sr. believes that American civics can help save our country—and that’s the mission of 1776, a major initiative launched earlier this year by the Woodson Center, which Woodson founded to give local leaders the training they need to improve their communities.

Featuring essays by notable scholars and writers such as Clarence Page, John McWhorter, and Carol M. Swain, and eventually a curriculum and multimedia resources, 1776 offers “perspectives that celebrate the progress America has made on delivering its promise of equality and opportunity and highlight the resilience of its people.”

A recipient of the Bradley Price and the Presidential Citizens Medal, Woodson began 1776 to counter The New York Times’ 1619 Project, a series of essays launched a year ago this month with a very different focus: It teaches that America is defined, now and forever, by slavery. As Nikole Hannah-Jones wrote in the 1619 Project’s lead essay: “Anti-black racism runs in the very DNA of this country.”

In Woodson’s view, the 1619 Project inculcates the “diabolical, self-destructive” idea that “all white Americans are oppressors and all black Americans are victims.”

“Though slavery and discrimination undeniably are a tragic part of our nation’s history,” Woodson notes, “we have made strides along its long and tortuous journey to realize its promise and abide by its founding principles.”

Woodson continues: “People are motivated to achieve and overcome the challenges that confront them when they learn about inspiring victories that are possible and are not barraged by constant reminders of injuries they have suffered.”

He points to the surprising number “of men and women who were born slaves” but “died as millionaires,” the existence of famous black business districts in cities such as Durham, North Carolina, and Tulsa, Oklahoma, in the midst of oppression and segregation, and heroes like baseball Hall of Fame slugger Hank Aaron as powerful examples for black uplift.

And it’s a lesson that Woodson knows firsthand.

Born in a low-income Philadelphia neighborhood, he rose up beyond his circumstances through hard work, the support of his family, and a good peer group. He entered the U.S. military, where he flew aircrafts for the space program; attended the University of Pennsylvania; and worked for the American Enterprise Institute, before starting the National Center for Neighborhood Enterprise in 1981. (It was rebranded as the Woodson Center in 2016.)

The Woodson Center’s mission is to seek out “individuals and organizations” already present in communities and help them “build their capacities,” in part by helping them “in linking to the resources they need.”

The center has helped more than 22,000 adults reach financial literacy and has trained over 2,600 grassroots leaders in 39 states, helping them “attain more than 10 times the funding expended by the Center.”

Though the center works on the “whole range” of issues associated with the “problems of poverty,” Woodson notes a “particular emphasis on those dealing with youth violence,” since “the restoration of civil order is a necessary foundation for civic health.”

In “The Triumphs of Joseph: How Today’s Community Healers Are Reviving Our Streets and Neighborhoods,” Woodson writes that low-income black communities are “dying from self-inflicted wounds.” He calls it a “moral free-fall,” one that “penetrates beyond all boundaries of race, ethnicity, and income level.”

In light of violent protests in the wake of George Floyd’s death in Minneapolis, Woodson has been active in print and on television, arguing that though Floyd’s killing was unconscionable, the violent protests that have ensued are “devastating the people in whose name they demand justice.”

Another way the Woodson Center combats civic breakdown is through its Violence Free Zone initiative, which aims to reduce youth violence by providing mentors to young students to “encourage their personal, academic, and career success.” The center reports that this initiative has led to a 50% reduction in crime, a 23% reduction in truancy, and a nearly 10% improvement in both student GPA and graduation rates.

Woodson views the 1619 Project and Black Lives Matter as major contributors to the growing belief that the foundations of America itself must be torn down. Against what he sees as defeatism and a denial of moral agency, Woodson preaches an ethic of self-reliance and personal resilience.

As Woodson sees it, “Nothing is more lethal than a good excuse for failure.”

His vision, a deeply American one, should be heeded by his countrymen of all colors.