University Shouldn’t Punish Me for Not Addressing Male Student as ‘Ms.’ 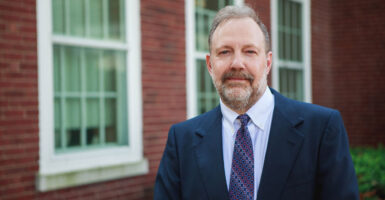 Returning from a sabbatical in my 21st year at Ohio’s Shawnee State University, I resumed teaching my regular political philosophy course.

Taking questions in one such class at the end of my first day back, I acknowledged a male student with a “Yes, sir?” (It’s my practice to address my students in this way and to call them Miss, Mrs., or Mr. to foster an atmosphere of seriousness and mutual respect.)

After class, the student approached me to explain that he identifies as a woman and hereafter expected me to refer to him with feminine titles and pronouns.

He didn’t like that. He began to pace in circles around me, his voice rising and taking on an edge. He suggested an unprintable name he might feel free to call me if I declined to indulge his demands. Moreover, he said, he would see to it that I lost my job.

So far, that hasn’t happened, but I do have a letter of discipline in my file now that says I treated this particular student differently than other students by referring to him by his given name rather than as “Ms.” and “she.”

That’s all. No other allegations of hostile conduct or even of an unfair grade for the student were ever filed.

Consequently, I found it necessary to file a grievance against the university for violating my First Amendment protections of speech and religious freedom. My objections to the student’s request were based on my own philosophical and religious convictions, which the university blithely ignored.

I also believe I should have a certain amount of freedom, within my own classroom, to determine the exact language I do and do not use when teaching my class. The university denied me that freedom, as well. And it also denied my grievance.

That left me with no choice but to file suit through my Alliance Defending Freedom attorneys. Contrary to claims, such as those recently made by law professor Andrew Koppelman of Northwestern University, that I was simply “spoiling for a fight” and that my “arguments are so extravagant that they shouldn’t be worthy of notice,” all professors should be free to respectfully exercise their First Amendment rights.

They should not be compelled to say and teach things they don’t believe or risk being fired or disciplined. And everyone should be free to stand thoughtfully for the truth.

He demanded to be referred to as a woman. Though I could not in good conscience do that, I did offer to make an exception and refer to him by his given name, rather than either “Mr.” or “Ms.,” but, again, that wasn’t what he wanted. Nor was it, once his preference was stated, what the university administrators wanted for him.

“But,” many would say, “he has the right to identify as a woman if he wants to.” Perhaps, but I also have a right not to identify him as something I do not believe he is.

He has his beliefs, and I have mine. I can’t compel him to speak like me, and neither he nor the university should be trying to compel me to speak like him.

And, as a philosophy professor who regularly teaches ethics, I have a professional as well as a personal responsibility to honor the truth for what it is—not for what some of us might want it to be.

One other point: I am a Christian, and we, too, set particular stock by the truth. We also put a premium on compassion, which is why I would never deliberately mistreat the student in question by mocking his point of view, or making my class more difficult for him, or adjusting his grade based on how closely his views align with my own. He earned and received a high grade, and we had no other difficult interactions.

Yet by punishing me for expressing my views, the university seeks to deny my students the opportunity to learn about and respond to philosophical ideas they disagree with.

This would not be serving these students well and would deprive them of one of the hallmarks of higher education.

Don’t just take my word for it. Listen to two of my former students. One wrote:

I’m a queer person. Your personal convictions could not be any further from mine. It doesn’t matter, though. I respect you, and I respect the ideas that you bring to the table of the marketplace of ideas. You made me think. That’s hard to come by these days.

Another, a self-described atheist, wrote:

Insulating students from intellectual scrutiny in the name of avoiding offense would be doing them a disservice. You and I saw eye-to-eye on very little and that made those arguments all the more valuable to me. … I hope that more people can [rein] in their emotions and see the benefit in having their ideas stress-tested by an earnest lover of wisdom.

These students powerfully express the real reason I am standing up for my First Amendment rights: to ensure that public universities remain a marketplace of ideas, not an assembly line for one type of thought.