Portland Has Been Rioting Since May. Is There an End in Sight? 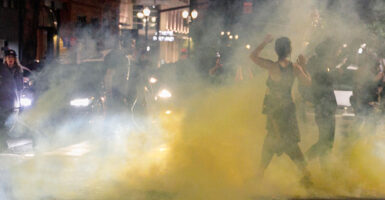 Police confront Black Lives Matter demonstrators in Portland, Oregon, on July 4, on what was then the 38th day in a row of unrest. The protests and violence have now been going on for three months. (Photo: John Rudoff/Anadolu Agency/Getty Images)

Portland, Oregon, is three months into rioting after the May 25 death of George Floyd with no end in sight.

The far-left anarchist group Antifa has been behind a lot of the violence in Portland. How is the situation developing?

Lora Ries, a senior research fellow for homeland security at The Heritage Foundation, joins the podcast to discuss it.

Lora Ries: Thank you for having me again.

Del Guidice: Well, thanks for being with us. When we had you on the podcast at the end of July, we were talking about what was happening in Portland, the riots there. Can you give us an update? Has any of the violence subsided in the past weeks?

Ries: It’s still going on. It tends to move around the city. Looking at today’s Portland police report, for example, it talks about rioters and arsonists attempting to set City Hall on fire.

The Portland police are really strapped. They’re low in numbers. The police department has said they had only 30 officers available for protests because they are also having to protect their own police precinct buildings, where those buildings are also under attack.

Del Guidice: Has there been any sort of reaction to that from the media there, even from citizens? Because that is a big deal.

Ries: I think slowly more Americans are speaking up about this, and thank goodness for the citizen journalists who are out there in far too few number, but showing what’s really going on. But little by little, I think more mainstream media is starting to realize that this is getting out of control.

Del Guidice: Given that these riots now have been going on for three months now, what do you think is the driving force behind the continued violence?

Ries: Again, I think there are organized groups that are well-funded and that are keeping this going and that are arming these very angry, young, violent rioters, whether it’s Antifa, it’s Black Lives Matter, it’s unorganized entities. And it’s just individuals. It’s kind of a cauldron, a variety of people committing these acts.

They seem intent on doing this up until the election. Then depending on the results of the election, beyond, if they don’t get the results that they want, it will be interesting to watch, given Don Lemon’s statement yesterday, will this simmer down at all?

Del Guidice: … Lora, you mentioned Antifa, what is going on with Antifa specifically? Has the situation developed with them? Have they been emboldened, would you say? Looking at from when the riots started to right now and Antifa’s involvement, how would you say, on a scale, have they gotten less intense or have they just become more and more bold?

Ries: They’ve become more bold because the political leaders have been so passive about it and permissive. If there aren’t consequences for these actions, the riots will continue, and they will escalate.

We do see escalation here. We see people being seriously hurt and even killed. Until the leadership brings a stop to it and restores order by letting the police do their jobs, by reinforcing them with National Guard, etc., this will continue to escalate.

I have to note an excellent piece by my colleague today, by Jim Carafano, it’s called [“Rioting in US Cities – 5 Reasons Why Violent Radicals Feel Emboldened“]. It’s on FoxNews.com, and it’s really worth a good read. It talks about these groups being emboldened because the local officials are failing us, the media is failing us, and politicians have failed us.

Del Guidice: Fox News had a piece out on Wednesday with [the] headline “Portland Police Declare Riot After Protesters Break Windows, Enter City Hall.” Are these riots, Lora? As they’re happening, it seems, and as you’ve said, that Portland law enforcement haven’t been able to get it under control, even as they’re now giving the admonition that these events are riots.

I mean, the violence occurs each night. Some arrests are made, but they continue the next night. We know that some of these rogue prosecutors are not prosecuting them for the crimes they’re committing, and they’re just going back out onto the street the next day.

This is a never-ending cycle, until leadership is exercised and a real police presence can bring this to a stop.

Del Guidice: Lora, what would you say about the response of the governor of Oregon, Kate Brown?

Ries: For example, yesterday she said, or she tweeted, “It’s time for the violence and vandalism to end, so Portland can focus on important work to be done to achieve real change for racial justice.”

This has been going on under her leadership, or lack of leadership, for nearly three months. I’m not sure why now she’s just saying it’s time for the violence to end and the vandalism to end. It’s been quite clear that none of this violence has advanced racial justice or helped a black life. It has been damaging communities and businesses.

So, it’s unfortunately too little too late, but hopefully we’ll see that these leaders will start letting law enforcement do their jobs, so that they can restore order.

Del Guidice: What about the response of the state and local leaders in Oregon?

Del Guidice: Oregon Public Broadcasting had a piece out this week that was headlined “Portland’s Protests: 3 Months in, No End in Sight.” Lora, do you see an end in sight, and what would that look like?

Del Guidice: Well, before we wrap up, let’s talk about Wisconsin very briefly. I know the Trump administration had said, reportedly, that the Democrat governor of Wisconsin, Tony Evers, turned down federal help there to quell riots that have sprung up in Kenosha. What is happening there, and what is your perspective on all of that?

Ries: Kenosha is now three nights in, and there does seem to be a willingness to not mirror Portland.

For example, the Kenosha board sent a letter to the governor asking that he permit the National Guard to come in. There seems to be conflicting information right now about the National Guard going into Wisconsin, but at least there’s a willingness for additional law enforcement to come in and to restore order.

One difference here, however, now, given last night’s shootings, I’m anticipating that those on the left are going to start blaming so-called vigilantes for the violence and for death, which would give cover to Black Lives Matter, and Antifa, and these other groups that have been committing this violence night after night after night in Portland and elsewhere.

But the bottom line is people want to be safe. They don’t want their businesses burned to the ground. If the leaders did their No. 1 job of protecting citizens and property, none of this would be happening.

Del Guidice: Lora, what would you say to state and local leaders in places like Portland, and Kenosha, and even others, where they might be faced with violence and they may be in a city or an area where law enforcement has seen maybe a decrease in funding? What would you say to them as they try to do right by the people of their cities?

Ries: To ask for more help. If they don’t have enough police, due to budgets, bring in the National Guard. Seek help from other law enforcement, so that they can maintain law and order.

Del Guidice: Well, Lora, thank you so much for joining us and giving us an update on what’s happening in Portland and elsewhere. We appreciate having you.