Why There’s an Exodus From California Cities 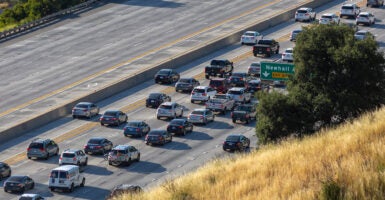 Years of failed policies have created conditions that have spurred a mass outflow of talent, workers, and families from California’s cities. Pictured: Traffic streams northward from Los Angeles on State Route 14 May 13, 2020, in Newhall, California. (Photo: David McNew/Getty Images)

John Cox is a former Republican California gubernatorial candidate and founder of C.H.A.N.G.E. CA. (Citizens for Honest and Non-Partisan Government Effectiveness, a project of the Rescue California Educational Foundation)

These are hard times for people living in many of our major cities. The COVID-19 pandemic, a surge in violent crime, and apathy or outright hostility directed toward law enforcement are all prompting many urban dwellers to reflect on whether they can reside in a major metropolitan area.

A mere 12% of Americans would prefer to live in big cities if they had their choice, according to a revealing new Gallup survey.

Currently, 80% of the population lives in urban areas, but the largely successful experiment of working from home may usher in a major flight from the cities. This may be a particularly attractive option in urban California, where long-simmering issues are reaching the boiling point.

Once beacons of envy for the rest of the nation, San Francisco, Los Angeles, and San Diego are now experiencing an exodus of residents.

Murder rates are surging in large cities this year, including San Diego and Los Angeles. Mayor Eric Garcetti endorses slashing funding for an already thinly-stretched Los Angeles police force. The Los Angeles Sheriff’s Department found that the average rate of sworn officers is 2.4 per 1,000 inhabitants in the nation, almost 63% less than the national average.

Politics blocks these underfunded departments from doing their jobs. For example, California has declared itself a sanctuary state, while sex trafficking of young girls and smuggling of contraband through an elaborate cartel network is at crisis levels.

“This isn’t about politics, this is about public safety,” San Jose Police Chief Eddie Garcia correctly noted after a 59-year old-Californian woman was killed in her home by an illegal alien. “He could have been turned over six times.”

Making things worse for the homeless and those struggling just to stay afloat, far-left policies are also driving up the cost of housing, food, and gasoline. Californians pay an average of 55.8% more for their residential electricity than other Americans, thanks to a politically mandated shift to higher priced, less reliable forms of energy.

Not only have ratepayers had to endure artificially high electricity bills, but while sheltering in place amid triple-digit temperatures, they’ve also had to endure a recent plague of blackouts. Destabilizing the state’s electrical grid system is not only irresponsible folly, it’s dangerous.

If all of this wasn’t enough, California has some of the highest tax rates in the nation and ranks 48th in regulatory freedom because of restrictive regulations and rampant cronyism, according to the Cato Institute.

Some politicians in Sacramento think it’s a good idea to raise our already ridiculous top income tax rate even higher, retroactive to this past January. Whether it’s successful or not, the idea sends a powerful message to those with the capital that keeps California dreaming: Get out before it’s too late. These policies also stifle entrepreneurs who struggle to jump through bureaucratic hoops and open new businesses, and that hurts workers.

Indeed, years of failed policies by a special interest-driven political establishment have created these conditions, which have already spurred a mass outflow of talent, workers, and families from California’s cities. Fallout from the pandemic will almost certainly accelerate this trend.

Rolling back decades of failed housing regulations would dramatically decrease homelessness. Onerous zoning restrictions and building codes have increased homelessness in California, as the state has some of the highest housing costs in the nation. Streamlining these regulations will encourage entrepreneurs to build safe, affordable housing developments for people who would otherwise end up on the streets.

The need for policies that unleash small businesses and entrepreneurs is particularly apparent in the housing industry, but the same mindset should guide how officials treat all economic policies.

It shouldn’t take two years to open an ice cream shop, and cities must end these delays by cutting superfluous and redundant regulations. For too many years, officials have monetized the regulatory functions of government at the expense of innovation.

Building better cities isn’t a partisan issue; Democrats and Republicans know we need a dramatic course correction regarding the survival of our major cities.

We won’t agree on every policy decision, but both sides can and should work together to build cities that offer citizens a great quality of life, innovation, job growth, a healthy environment, and protections for individuals and their property.