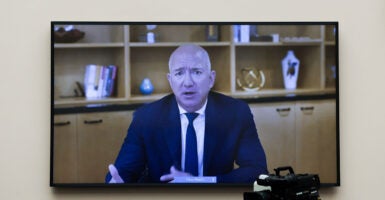 Conservative members of the House are asking Amazon CEO Jeff Bezos to answer questions as to why some conservatives appear to have been banned from using Amazon Smile, an Amazon charity program.

“The exclusion of these conservative groups from Amazon’s heavily-trafficked digital platform leads to less exposure for these groups and fewer opportunities for donations,” the letter reads, which was obtained by Fox Business and signed by Rep. Jim Jordan, R-Ohio, ranking member of the House Judiciary Committee.

The Amazon charity program, Amazon Smile, according to its website, donates 0.5% of eligible purchases to the designated charitable organization with no added costs or fees but some conservative organizations are not allowed to use the program, which raised $100 million in 2018 for charities that took part, Fox News reported.

“Amazon’s reliance on the SPLC as a barometer to determine the eligibility of charitable organizations on AmazonSmile serves to discriminate against conservative views,” the letter reads, which was also signed by Rep. James Sensenbrenner, R-Wis., who sits on the House Judiciary Committee, and 13 other House Republicans.

Amazon’s reliance on the SPLC as a barometer to determine the eligibility of charitable organizations on AmazonSmile serves to discriminate against conservative views.

James says that Amazon has a right to run its company the way it sees fit, but should also care about the rights of its consumers.

“While Amazon is within its rights as a private company to conduct its business the way it wants, consumers also have a right to complain to Amazon and to ultimately decide not to do business with the retailer if their complaints aren’t taken seriously.”