A Back-to-School Guide for Conservatives 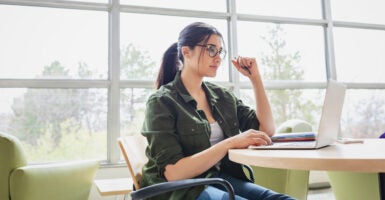 Conservative students returning to school this fall likely will encounter classmates with strong opposing views. It’s important to know how to advocate for your beliefs with confidence on campus. (Photo: Tony Anderson/Getty Images)

Lisa Kriegshauser is a graduate student at Liberty University and also a Heritage Foundation Academy Fellow.

Is patriotism dying? Are there any good Americans left?

Over the past few months, Americans may have begun to wonder about those questions, and both will be on the minds of conservative students as they return to school this fall.

It has been a long time since colleges were the refuges of free thought and expression they were designed to be. They’ve become factories for liberal dogma, and those factories will be working overtime as the nation approaches a vicious national election. Those on the outside can advocate conservatism in academia, but real change must happen from within.

Perhaps there are opportunities. Nothing makes a person appreciate freedom more than losing it, and in the wake of the pandemic, violent mobs, and cancel culture, whose victims include Aunt Jemima and the TV show “Cops,” we’ve seen how important the Constitution and the separation of powers are to American society.

In California, places of worship were told they “must discontinue … indoor singing and chanting” because of the coronavirus. In Denver, participants at the “Back the Blue Rally” were assaulted by members of Black Lives Matter and other similar groups. Those wishing to erase American history have defaced multiple statues, including one of abolitionist Matthias Baldwin.

Sadly, many of these “woke” revolutionaries calling for the dismantling of American principles and the institutionalization of Marxist doctrine are college-age individuals.

Conservative students returning to school this fall likely will encounter some of these woke revolutionaries. Those revolutionaries are on the wrong side of history—what they advocate has produced nothing but mass starvation and the death of millions.

Sadly, they make up the majority on college campuses, and, although universities claim to be “diverse and inclusive,” these majorities don’t hesitate to try to silence conservative views.

Those who fight for American principles have been underdogs before—our country was founded on a victory by freedom-minded colonists over the most powerful country in the world at the time, the British Empire of the 18th century.

Conservative students should remember that the rights those brave colonialists fought for, including free speech, belong to them today, despite what they may hear from teachers and classmates.

They also should remember, as Robert Frost once said, that “Freedom lies in being bold.”

As conservative students return to campus and begin to participate in these debates, here are four tips to help them advocate conservative principles without being tarred and feathered:

Here are some resources to check out:

Find out what conservative clubs or organizations your university offers, and join so you can network, discuss issues and hone arguments in a welcoming environment. To get involved, look for these organizations on your campus:

Thomas Jefferson and John Adams were political adversaries, yet they died as close friends. Jefferson eloquently wrote on this concept in a letter to William Hamilton, saying, “I never considered a difference of opinion in politics, in religion, in philosophy, as cause for withdrawing from a friend. … I never deserted a friend because he had taken an opposite side.”

Find friends with opposing viewpoints and ask what, why, and how they believe what they believe. Cultivate relationships built on mutual respect that result in fruitful debate.

Don’t be afraid to stand for what you believe. Know the facts, get involved, and cultivate relationships built on mutual respect.

Advocating conservatism means answering probing questions and engaging in tough discussions. Some people will want nothing to do with you, but others crave a wholesome debate. After all of this, you might even get the courage to debate a professor.

These are unprecedented times, but the preservation of America and the principles that make it so great starts with its young people. To all conservative students, patriotism is not dying, and there are good Americans left.

This is our country, and we must take a stand.