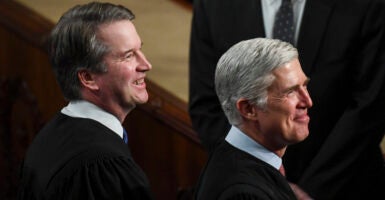 "Maybe even five, but four is not a stretch at all,” President Donald Trump says of the number of Supreme Court vacancies that could open in the next four years. Pictured: Justices Brett Kavanaugh, left, and Neil Gorsuch await Trump's State of the Union address Feb. 5, 2019, in the House chamber of the Capitol. (Photo: Toni L. Sandys/The Washington Post/Getty Images)

President Donald Trump projects that he’s on track to win confirmation of more than 300 new conservative judges by the end of the year.

And in the next four years, the president predicts, as many as five vacancies could open on the Supreme Court.

“By the time we are finished, we will have in excess of 300 [federal judges confirmed], including the court of appeals, and of course two very exceptional Supreme Court justices,” Trump said Friday in remarks about his success in seating new judges to the Council for National Policy, a conservative group, in Arlington, Virginia.

“I’ve had two [Supreme Court picks],” Trump said. “Some presidents have had none, because you generally pick them young and they last a long time.”

Appointing conservative judges has been a key part of Trump’s legacy since he took office in January 2017, most visibly Supreme Court Justices Neil Gorsuch and Brett Kavanaugh.

He also won Senate confirmation of more than 200 judges, of which 53 were appeals court judges, according to The Heritage Foundation’s Judicial Tracker.

“I can tell you, it’s driving them crazy,” Trump said of Democrats.

In coming years, he warned, more vacancies will occur on the high court.

“We could have two, to three, to four; maybe even five, but four is not a stretch at all,” Trump said. “That would mean the entire balance of the court doesn’t just shift. It becomes dominant.”

Trump’s judicial confirmations, achieved with key help from Senate Majority Leader Mitch McConnell, R-Ky., are well in excess of  the number of federal judges confirmed in the fourth year in the White House for Barack Obama, both the elder and younger Bush, and Ronald Reagan, according to Heritage’s Judicial Tracker.

Trump is roughly on par with Clinton’s fourth year, which saw 203 judges confirmed. The tracker’s most recent tally shows Trump with 202 confirmations.

As he has done somewhat sarcastically in the past, Trump on Friday credited his predecessor with leaving him so many vacancies to fill.