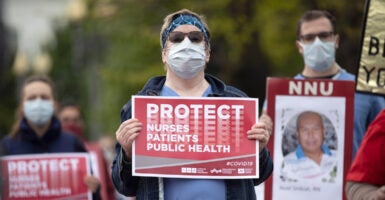 Nurses opposed to unionization at Mission Hospital in Asheville, North Carolina, made their voices heard over heavy rainfall at a demonstration in front of the hospital.

“I don’t want someone standing between me and my patient, telling me how to do my job,” said one nurse who is voting “no” on the union-organizing effort. “I can make my own decisions.”

“What if someone dials 911, and we happen to be on strike at the time?” asked another nurse, who is part of the “Vote No” movement. “I’m concerned with the divisiveness with everyone in the hospital. We are a team.”

The Daily Signal counted about 10 “Vote No” nurses gathered outside of the hospital in the rain Friday morning during the streaming event.

“It’s easy to bring your concerns to the hospital,” another nurse said. “You can do this through the right process and make changes, and it doesn’t cost you anything from your paycheck.”

Supporters of the unionizing effort by National Nurses United, however, cite what they say are staffing shortages and working conditions that put nurses and hospital patients alike “at risk.”

Under union election rules, hospital management is not permitted to advance its viewpoint to employees within 24 hours of the vote, defined as when polling places open.

The National Labor Relations Board, an independent agency of the federal government, is conducting the secret-ballot election. But since ballots were mailed to nurses Aug. 18 and will be counted by the labor board Sept. 16, that means the nurses’ employer, Mission Hospital, effectively is silenced for almost a month.

Going into the union election, Rachel Greszler, a research fellow in economics at The Heritage Foundation who specializes in labor policy, found that the union has all the advantages. Even in the absence of COVID-19, union election rules are rigged against the hospital’s management, she said.

But the vote-by-mail process implemented as a safeguard during the pandemic puts union operatives in an even stronger position to corral nurses, Greszler told The Daily Signal.

“While the unionization process already heavily tips the scale in the union’s favor, the mail-in ballot process brought on by COVID-19 has effectively put a 30-day gag order on Mission Hospital,” she said, adding:

While the hospital cannot talk to its employees, provide information, or even defend itself against potential false claims by [National Nurses United], the union can send its employees to workers’ homes to try to convince them to vote yes to unionizing.

Unions have been known to use intimidation to get workers to sign cards indicating they want an election, but at least with in-person, secret-ballot elections, workers can later vote their true desires. Now, we have NNU organizers showing up to nurses’ private homes, and inside those homes are the ballots that will determine the election outcome.

“In the Emergency Department, patients have been left in the hallways, despite having multiple open rooms, because there were not enough RNs to provide care,” the union’s press release says, adding:

In the Trauma Care Unit (TCU), short staffing has been common, sometimes with the unit down three RNs, which puts everyone at risk. In one example, two TCU RNs came down with fevers, and one was vomiting after exposure.

Stephanie Grant, a registered nurse at the hospital, is quoted in the Aug. 4 press release as saying: “We are elated to finally have the opportunity to proceed with a vote to build a democratic union with a union voice to protect our patients and our colleagues to assure the entire Asheville community that they can count on high-quality care they need and deserve.”

In a letter dated July 20 addressed to leaders of Asheville and Buncombe County, 25 nurses at Mission Hospital make their case against the union.

“Please do not let blind support of NNU’s fictitious agenda lead you to abandoning us,” the letter says. It also contends that National Nurses United “is responsible for nationwide strikes that are hurting nurses, patients, and communities.”

Vickie West, a nurse at the hospital, has circulated an open letter to the Asheville community and the news media that details some of her concerns about the union.

“As I’ve listened to the arguments for and against bringing a nurse’s union to Mission over the past few months, I knew from my experience with a previous employer that unions are not the answer that they are being promoted to be,” West writes, adding:

There, I saw that most staff did not like the union and only called on them when they had a personal agenda item to push. It caused some staff to be pulled away from patient care to attend to their union duties.

Those who were mediocre or low performers were supported most by the union. In my opinion, it didn’t make for better staffing, better wages or a better work environment.

West also raised objections to how the union might handle questions of seniority and the impact it could have over merit on personnel decisions.

“Advancement should be based on performance, not seniority,” one nurse said during the demonstration. “I also want my voice heard. I don’t want someone else speaking for me.”

But the union contends in its press release that hospital staffers have been put in compromising positions that are sometimes unsafe.

On general medical floors, several incidents of attacks on [registered nurses] from agitated patients have occurred.

In one case, an RN was assaulted when pulled down by her hair, suffering a head injury. In another incident, a social worker was grabbed from behind and dragged across the floor. Workplace violence incidents occur far more frequently when staffing is inadequate.

Inadequate staffing has also led to unacceptable delays in care, such as timely transfer of patients for diagnostic procedures in the Trauma Care Unit.

Over the course of the past five months, we have seen NNU bring unnecessary conflict and divisiveness to our hospital. We believe quality care is best served when our patient care team works collaboratively together.

With that said, we respect and will protect the right of nurses to determine for themselves whether or not they want union representation, and will encourage all to take part in the election.

National Nurses United describes itself as the “largest union and professional association of registered nurses in U.S. history” with about 185,000 members.

If the union prevails in the election, it reportedly would represent about 1,600 employees of Mission Hospital.

At least one demonstrator had a message for colleagues who support unionization. The nurse, holding up a “No Union” sign, invoked the name of Florence Nightingale, the English social reformer widely viewed as the founder of modern nursing.

“I ask you to reflect on when you took your Florence Nightingale oath and when you said you would do no harm,” she said. “How could you possibly walk from the bedside of a patient to go on strike?”

That same nurse said she was familiar with cases where patients at Mission Hospital could have died if nurses had been out on strike.

“Imagine if, in the upcoming presidential election, one candidate was prohibited from campaigning once mail-in ballots were sent out, but the other candidate was allowed to campaign door-to-door while the election ballots sit inside,” she said. “Regardless of which candidate one supports, that’s clearly not a fair process.”

Greszler also said she expects that victory for National Nurses United would spur unions in other parts of the country to embrace mail-in balloting and potentially jeopardize worker freedom:

The Mission Hospital nurses is an important election because it takes place in North Carolina, with the second-lowest unionization rate in the nation.

If the NNU is able to exploit the use of mail-in ballots to unionize nurses there, this could incite other unions to do the same, threatening the superior job growth and income gains that come from employers and employees being able to work together, instead of going through a micromanaging union middleman.