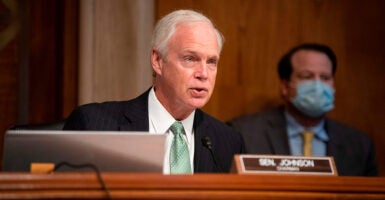 In a tweet, the Wisconsin Republican linked to a Daily Caller News Foundation report that Winer destroyed reports he received from Steele in January 2017.

.@SenGaryPeters is again trying to undermine my investigation with absurd process arguments to delay or derail our subpoena of fmr @StateDept official Jonathan Winer, who destroyed his correspondence w/Chris Steele. What is Sen. Peters afraid we’ll learn? https://t.co/bEQoD2Y1Bx

The Senate committee voted along party lines on June 4 to grant Johnson broad authority to issue subpoenas for investigations that Republicans are conducting into Crossfire Hurricane, “unmasking” requests against Trump associates, and Hunter Biden’s work in Ukraine.

Johnson said last week that he intended to subpoena Winer to appear for a deposition about his role in handling the dossier. Johnson issued a subpoena to FBI Director Christopher Wray on Aug. 6 for records related to Crossfire Hurricane, the counterintelligence investigation of the Trump campaign.

Peters’ office did not respond to a request for comment about Johnson’s claims that he is stonewalling the subpoena for Winer. A source familiar with the matter told The Daily Caller News Foundation that the Democrat is demanding that the full committee hold votes for individual subpoenas.

Peters and other Senate Democrats have criticized Johnson’s investigation, saying that it is intended to provide political cover for President Donald Trump.

Winer, who served as special envoy to Libya through early 2017, was Steele’s main point of contact to the State Department. From 2014 to 2016, Steele provided Winer with more than 100 intelligence reports about issues in Russia and Ukraine.

In Summer 2016, Steele briefed Winer on an investigation into Trump he was conducting on behalf of the Clinton campaign and the Democratic National Committee.

Winer provided a memo of Steele’s information to other State Department officials. The information was also shared with then-Secretary of State John Kerry, whom Winer had worked for in various roles over the years. Winer also served as a background source for two articles published before the election that were based on Steele’s allegations of Trump-Russia collusion.

According to a Senate Intelligence Committee report released on Tuesday, Winer denied in his first interview with the panel that he arranged Steele’s State Department meeting. Winer changed his answer in a follow-up interview after he was presented visitor logs at the State Department that showed he signed Steele into the agency’s headquarters, the report said.

Winer also told the Senate Intelligence Committee he destroyed reports in January 2017 that he received from Steele after the former spy requested he do so.