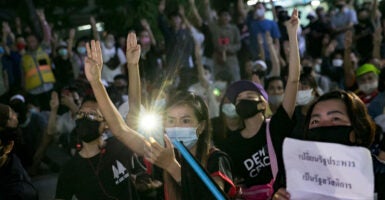 There is a long-held logic in Washington that puts so-called geostrategic interests ahead of values. The idea is that we cannot afford to stand for liberty because our global competitors do not.

If we alienate oppressive governments by criticizing them or pushing for political reform, the logic follows, they will side with our competitors and tilt the game board against us.

This is a much too simple way of looking at the world.

A case in point right now is what is happening in Thailand. For weeks, thousands have been demonstrating in favor of democratic reform, which the Thai government is already attempting to suppress.

If the U.S. turns a blind eye to this suppression—or sides with the Thai authorities—out of fear of pushing the Thai government closer to Beijing, we will be betraying our own democratic values.

The demonstrators are calling for a new constitution and greater freedom of expression. Protesters also are calling for constraints on the power of the Thai monarchy—a very touchy subject in Thailand, as criticism of the monarchy can land one in prison for up to 15 years.

It is hard to blame them. The state of democracy in Thailand today is not good. Elections held last year were best described as “partly free and not fair.” Although they did provide for a transition to civilian government, the military remains very much in control of the Thai political structure.

The strong influence of the military is by design. The country’s 2017 constitution, drafted by the Thai military junta, was written precisely to keep the military in, to keep former Prime Minister Thaksin Shinawatra (and other opposition like the former Future Forward Party) out, and to augment the powers and privileges of the monarchy.

Of course, Thailand is not the worst abuser of liberal freedoms. Freedom House now classifies it as partly free—a status it holds with several other countries in Southeast Asia, including the Philippines, Singapore, Malaysia, and Indonesia, which have regular elections.

The U.S. is right to engage Thailand as the valuable treaty ally it is. The Thai people, however, are also right to demand more of their government.

A relatively low-grade crackdown is already underway, and likely will intensify. The best model may be the current situation in Hong Kong, which Thai authorities may see as the most efficient approach to shutting down dissent.

Like Hong Kong following Beijing’s imposition of its “national security law,” the legal structure is in place in Thailand to target protest leaders and try to decapitate the movement.

There is also the possibility of a much broader, violent shutdown of the protests that anyone familiar with the Thammasat University massacre of 1976 shudders to consider.

In either case, the U.S. must stay true to its values. It cannot condone the arrest of political activists or a broader crackdown on peaceful protests. The Trump administration should speak out and take action against individuals responsible—as it has in Hong Kong.

If things cascade into another military takeover, Washington will be compelled to curtail the extent of its military cooperation with Thailand—as it did after other recent coups in 2006 and 2014.

Is this ceding the field to the People’s Republic of China in what is now a global strategic competition? Not at all.

Certainly, in the short term, Beijing will seek to gain an advantage, as it has at other tense points in U.S.-Thai relations. But Thailand has long had a good security relationship with China, the best in Southeast Asia, in fact. That is not the doing of the U.S.

Thailand is the classic fence-sitter. It wants to engage both the U.S. and China, and barring the former, will still be wary of drawing too close to the latter.

In the longer term, American interests align with the Thai people. They will remember where we were in these days of protests. Any tactical edge we may gain with U.S.-Thai military exercises or new arms sales will be overshadowed by their disappointment in our sense of priorities.

American values are a strategic asset, not a liability. We may soon be called upon to treat them as such.