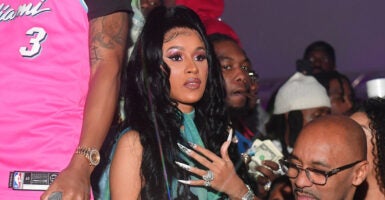 Cardi B and others might not think her song is vulgar or offensive, but it is. And there’s a much bigger problem here. Pictured: Cardi B and fellow rapper Offset attend the Million Dollar Bowl at the Miami Dome on Feb. 3 in Miami. (Photo: Prince Williams/Wireimage)

>>> Warning: This article contains some graphic, though partially redacted, language.

The song, which stands for Wet-Ass P—y, is an extremely graphic so-called “celebration” of female sexuality. So is the accompanying video.

The track opens with the words:

Whores in this house

There’s some whores in this house

There’s some whores in this house

Later, the song seems to suggest sexual favors for money and praises the ability to view sexual images.

Pay my tuition just to kiss me on this wet-ass p—y (Mwah, mwah, mwah)

Now make it rain if you wanna see some wet-ass p—y (Yeah, yeah)

Speaking in an interview with Elle magazine, Cardi B said, “My music is always going to make a woman feel like a bad b—h,” according to Metro.

“When you make a woman feel like she’s the baddest b—h in the room, to me, that’s female empowerment.”

But here’s the real question that’s begging to be asked: Since when does female empowerment, or empowerment period, equate with sexualization?

In another interview, Cardi B said she wasn’t expecting the reaction that “WAP” elicited from some listeners, especially conservatives.

I knew it was gonna have a big impact, I guess, because of me and Megan. But I didn’t know it was going to be so controversial. I never expected that, you know, conservatives and Republicans were going to be talking about the song.

I didn’t think the song was as vulgar as they said it was, you know?

Although Cardi B—whose real name is Belcalis Marlenis Almánzar—may be among those who don’t think the song is vulgar or offensive, it is. But that’s not the point.

There’s a much bigger problem here, which is the fact that a song about sex and sexual gratification is viewed as “empowering” at all.

These songs fail to exhibit any shred of true love, which is what the sexual act should be about, a gift of oneself for the other, not a self-satisfying experience to cash in on.

One internationally known female comic who I follow has praised Cardi B for “WAP,” essentially saying that she is courageously joining a crowd of male artists and rappers who have been unabashedly producing sexually explicit songs for decades.

This whole perspective is flawed from the get-go, though, starting with the belief that songs or movies or anything for that matter that sexualizes someone for the “pleasure” of another adds anything of value to society.

It’s also concerning that singing explicitly and vulgarly about sex, be it by men or women, is some sort of a point of arrival where real equality is found.

Regardless of whether or not “WAP” or songs like it are written by men or women, their embrace by society is degrading and disturbing.

Why? Because these songs are all about using people for selfish gain. How is that something to celebrate?

What if, instead, the focus was on, and truly celebrated, female empowerment and accomplishments?

When I think of that, I see women such as another “B”—Susan B. Anthony, who fought for women’s right to vote over 100 years ago.

I see women like the courageous Amelia Earhart, the first female pilot to fly solo across the Atlantic Ocean.

I see a frail nun who spent all of her days caring for people dying on the streets of Calcutta, those who had no “quality of life,” people who everyone else had left for dead.

I see a leader of England, known as the “Iron Lady,” who worked with Ronald Reagan and Pope John Paul II to bring Soviet communism to its knees.

What I don’t see is two women grinding on one another.