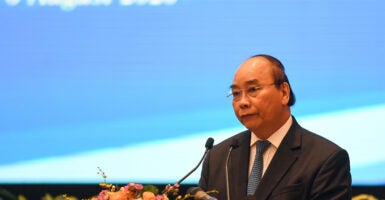 This year marks the 25th anniversary of the United States and Vietnam reestablishing diplomatic relations.

Over the past 25 years—particularly since Vietnam’s accession to the World Trade Organization in December 2016, when the U.S. granted its former foe permanent normal trade relations status—U.S.-Vietnam economic and trade relations have expanded rapidly.

Vietnam is located at the heart of the Indo-Pacific, a dynamic region of immense opportunity that nonetheless faces significant challenges in its economic, political, and security environment.

As underscored in a 2017 Heritage Foundation event featuring Prime Minister Nguyen Xuan Phuc, Vietnam has been working to find the best path forward to guarantee the prosperity and security of its people and its place both in regional architectures such as the Association of Southeast Asian Nations and in the wider community of nations in the region and the world.

Vietnam’s economic freedom has been measurably improving, enhancing its place in the global economy. According to The Heritage Foundation’s latest Index of Economic Freedom, an annual report on the openness and competitiveness of 180 countries around the globe, Vietnam jumped 23 places to become the 105th-freest economy in the world.

The country’s overall score has increased by 3.5 points due to improvements in a number of key policy areas, including property rights, business freedom, and market openness.

The Vietnamese economy has registered annual economic growth rates averaging more than 6% annually over the past five years. Capitalizing on its gradual integration into the global trade and investment system, its economy has been transforming toward a more market-oriented system since it launched its “doi moi” (renovation) reforms in 1986.

As noted in the index, structural reforms—which have allowed the development and growth of private enterprise and market allocation of most goods and services—have included ongoing privatization of state-owned enterprises, liberalization of the trade regime, and increasing recognition of private property rights.

The country still has institutional weaknesses, such as lingering corruption and the lack of judicial independence, that hold back economic freedom.

Needless to say, America’s interests in Vietnam extend beyond trade and investment. No trade agreement or interaction, no matter how modern and comprehensive, can itself install democracy or solve a country’s human rights problems.

However, trade relationships can and should encourage governments to enforce the rule of law.

To that end, the United States is intensely interested in encouraging improved human rights conditions and democracy for the Vietnamese people.

Bilateral relations have grown steadily over the past 25 years. Still, there are key differences between us, especially in the area of human rights—something Congress is always keen to keep administrations focused on.

For example, while the perennial Vietnam Human Rights Act, introduced last year as H.R. 1383, specifies that “the United States should pursue trade policies with Vietnam that expand the information economy in Vietnam,” it is overwhelmingly focused on human rights.

It also expressed opposition to the sale of “lethal defense articles or defense services” unless such sales ensure U.S. interests “in the free and open navigation of the South China Sea,” or unless Vietnam has made “additional, significant, and sustained steps to advance internationally recognized human rights.”

Although the legislation has never made it to a president for his signature, it’s a clear sign that however strategic the relationship may be, there are obstacles still to be overcome.

Secretary of State Mike Pompeo, who has characterized the American-Vietnamese relationship as “incredibly special,” remarked in commemorating the 25th anniversary of U.S.-Vietnam relations in July:

You know, in the past, we were opponents on the battlefield. But today, our security relationship is all about cooperation … .

As we celebrate 25 years—a quarter-century—of partnership in 2020, let us renew our commitment to a strong and independent Vietnam and a peaceful and prosperous Indo-Pacific region.

Pompeo is right. There may be challenges, but those are worthy goals for a pragmatic American partnership with Vietnam.