This Misguided Protectionism Would Harm All Americans, Including Farmers 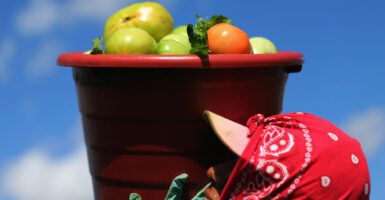 Some U.S. growers are likely to renew their push for a “seasonality provision” to be added to the United States-Mexico-Canada Agreement this week. Such a provision would be an ill-advised change to U.S. law. Pictured: A worker carries a bucket of tomatoes as she harvests them in the fields in Florida City, Florida, Feb. 6. (Photo: Joe Raedle/Getty Images)

Driving up food prices is a bad idea any time, especially during a pandemic.

Yet a small subset of fruit and vegetable growers are pushing for government action that would do just that, hurting American families and other farmers growing the same exact commodities.

Here’s what’s happening. This week, the Office of the United States Trade Representative, the Department of Agriculture, and the Department of Commerce are holding a second round of hearings to discuss whether American seasonal and perishable produce farmers are being harmed by unfair trade practices.

These hearings come after some Southern produce growers complained during the North American Free Trade Agreement renegotiations about difficulties competing with imports from Mexico.

The growers appealed to U.S. lawmakers that the new agreement, the United States-Mexico-Canada Agreement, or USMCA, needed a “seasonality provision” that would give growers of seasonable and perishable produce opportunities to seek trade remedies, i.e., the imposition of duties on produce imports from Mexico.

The “seasonality provision” would have made a sweeping and ill-advised change to U.S. law by allowing one state’s growers, instead of an entire industry, to bring a case to the federal government against foreign imports. This would undermine the democratic and commonsense principle to ensure that an entire industry, not just a small number of businesses within an industry, support any action.

Fortunately, the USMCA excluded such a provision, but demands have persisted from these growers for it to be implemented one way or another.

If the government succumbs to these demands, there could be serious repercussions for agricultural trade and American families.

For example, Florida tomato growers have pointed to Florida’s less friendly weather conditions for growing tomatoes as compared to that of Mexico. But this is an agricultural problem, not a trade problem.

Any trade issues, such as unfair subsidies, are vaguely asserted without any details regarding the specific trade-distorting practice.

This makes sense given that it doesn’t appear there are trade-distorting practices, including in connection with subsidies. According to a Congressional Research Service report, the “available information indicates that Mexico does not provide direct financial support to its produce growers, which is similar to the situation that prevails in the United States.”

Not surprisingly, this whole effort is leading to domestic disagreement within the agriculture sector. Agriculture Secretary Sonny Perdue recently stated that Western growers differ on opinions to southeastern growers when it comes to taking any action to curb seasonal imports.

If duties were imposed on Mexican produce, this would increase fruits and vegetable prices for American families, among other problems.

There could also be trade-related repercussions for a wide range of industries, including agriculture.

Imposing duties that would restrict imports, especially based on weak-to-no evidence of trade-distorting policies, would inevitably lead to retaliatory tariffs by affected countries. This would then hurt other agricultural producers by limiting export opportunities.

The harm to exports, though, wouldn’t be limited to agriculture. The inevitable retaliatory tariffs would target numerous sectors across the economy.

Ironically, the provision also would hurt the growers that brought a case and, even worse, it would hurt those growers within the entire industry who didn’t want a case to be brought in the first place.

Agricultural trade is extremely important, and the federal government should be proactive in going after unfair trade practices by other countries. But this whole issue regarding seasonal produce is simply an unfortunate diversion that is unsubstantiated and would create significant harm.