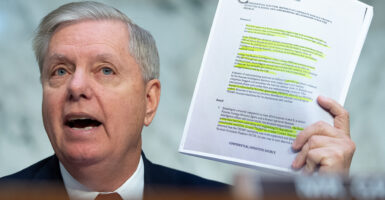 The Senate Intelligence Committee said in a long-awaited report released Tuesday that there is no evidence that the Trump campaign conspired with the Russian government to influence the 2016 election, affirming the findings of other investigations into an alleged Trump-Kremlin conspiracy.

The Intelligence Committee’s report, which clocks in at 966 pages, also offers a scathing assessment of the FBI’s handling of the so-called Steele dossier, a key document in the Trump-Russia collusion conspiracy theory.

The FBI gave the Steele Dossier unjustified credence, based on an incomplete understanding of [Christopher] Steele’s past reporting record. The Committee found that, within the FBI, the dossier was given a veneer of credibility by lax procedures and layered misunderstandings.

The report, crafted by both Republicans and Democrats, describes a series of roadblocks and hurdles that the Senate committee faced in investigating information from Steele, a former MI6 officer for the British government hired to investigate Donald Trump on behalf of the Democratic National Committee and the Hillary Clinton campaign.

The report says that Steele “repeatedly refused” to meet with the panel, though he ultimately submitted written responses on Aug. 16, 2018.

Special counsel Robert Mueller’s office also refused to provide information about its investigation into the dossier, the report says.

The report says the Senate committee was limited in its investigation because of “the centralization of information regarding the dossier” at the special counsel’s office, and prosecutors’ “decision not to share that information” with the committee.

The FBI relied heavily on information from Steele to obtain warrants to conduct surveillance on Carter Page, a Trump campaign aide in 2016 who is accused in the dossier of masterminding a conspiracy between Trump associates and the Kremlin.

“We can say, without any hesitation, that the Committee found absolutely no evidence that then-candidate Donald Trump or his campaign colluded with the Russian government to meddle in the 2016 election,” Florida Sen. Marco Rubio, R-Fla., the acting chairman of the Senate panel, said in a statement.

The panel raised concerns over Steele’s links to Oleg Deripaska, a Russian oligarch with close ties to Russian President Vladimir Putin. Steele had “multiple” links to Deripaska, having worked for the Russian’s attorneys from 2012 through 2017, the report says.

One section of the report addresses the possibility that Russian intelligence operatives fed disinformation to Steele that ended up in his dossier on Trump.

A Justice Department inspector general’s report released Dec. 9 said that the FBI received evidence in early 2017 that Russian operatives may have fed false information into Steele’s network of sources.

The Senate committee did find “irrefutable evidence” that the Russian government meddled in the 2016 election, and identified several Russian attempts to cozy up to Trump associates during the campaign and presidential transition period.

Sen. Mark Warner of Virginia, the top Democrat on the committee, said the report lays out a “a breathtaking level of contacts between Trump officials and Russian government operatives that is a very real counterintelligence threat to our elections.”

Perhaps the most eye-catching links laid out in the report are those between former Trump campaign chairman Paul Manafort and a former business partner named Konstantin Kilimnik. The report says that Kilimnik is a Russian intelligence officer.

The report cites previous reports as well as findings from the special counsel’s investigation that Manafort shared nonpublic information from inside the Trump campaign with Kilimnik, who was also a link between Manafort and Derpiaska, the Russian oligarch.

It remains unclear why Manafort provided the information to Kilimnik and whether the Trump campaign was aware of Manafort’s activities.

Manafort, fired from the campaign in August 2016, is serving a federal prison sentence on charges related to consulting work he did for Ukraine years before joining the Trump team.

The report also details contacts between other Trump associates that Russian operatives may have sought to exploit to influence the campaign.

Allegations of blackmail material on Trump, including one central to the Steele dossier, are also addressed in the report.

Most of the allegations suggested that Russian operatives were blackmailing Trump with video of him with Russian women. The report does not point to any conclusive evidence that the Kremlin possessed derogatory information on Trump, or that he was ever threatened with exposure.

The report says that two of the Russians in the meeting, Rinat Akhmetshin and Natalia Veselnitskaya, likely had ties to the Russian government and Russian intelligence, but that there was no evidence that they provided the campaign with any useful information related to the election.

The report notes what long has been reported, that both Akhmetshin and Veselnitskaya worked at the time of the Trump Tower meeting with Simpson, founder of Fusion GPS, the firm that hired Steele.

The report says Simpson provided some of the research on a Hillary Clinton donor that Veselnitskaya included in a report that she took into the Trump Tower meeting.