Heroes Died for What the Flag Represents. Here’s Why We Stand for It Today. 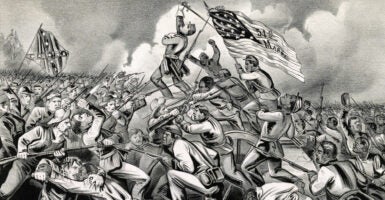 An American flag waves over the head of a black man. Surrounded by acts of injustice, rage, and violence, he wears a uniform tinged with red and kneels in the midst of a green field.

A calling has led him to this place, a desire to “serve my God serving my country and my oppressed brothers.”

This man is William Carney, the date is 1863, and the place is Fort Wagner, the southern approach to the harbor in Charleston, South Carolina.

Carney’s regiment, the 54th Massachusetts Infantry, had been tasked with serving as the spearhead of the Union assault. As the bullets whistling past claimed the life of the color sergeant, Carney picked up the flag and led the assault on the Confederate position.

He soon found himself alone and defenseless, as the rest of his company lay dead or dying. Turning back to the Union lines, Carney was hit by two bullets, yet somehow managed to continue on, still bravely grasping the flag.

After being shot twice more and just before collapsing, Carney finally made contact with the rest of the 54th, saying, “Boys, the old flag never touched the ground!”

Later, as he was awarded the Medal of Honor, Carney simply stated: “I only did my duty.”

Heroic stories like that of William Carney provide an important reminder for all of us during these times of strife and acrimony. As we grapple with our past, we must never forget the sacrifices of those who have stepped forward in every generation to renew and more perfectly realize the promise of America.

We today must ask ourselves why William Carney, despite the horrors of slavery he and his family had been subjected to, saw something in the American flag that was worthy of honor, that was worth fighting to protect.

In contemplating this question, we must realize that America is much more than a country. It is an idea, indeed a revolutionary idea, “that all men are created equal, that they are endowed by their Creator with certain unalienable rights.”

The promise of America lives on through those brave heroes who have, over the centuries, fought to fulfill our societal vow that, wherever the American flag flies, there too shall be found life, liberty, and the pursuit of happiness.

In ratification of this sacred promise, our blood has watered the beaches of Okinawa, the fields of Gettysburg, the waves of the Atlantic, the streets of Selma, the hedgerows of Normandy, and the deserts of the Middle East.

The flag is a symbol of America at its best. It is a banner of remembrance to those who have fought and died in its shadow, an emblem that has stricken fear into the hearts of dictators and tyrants, and a sign that has given hope to millions escaping the clutches of oppression.

But, most of all, the flag embodies our commitment to fully realizing the founding principles of America.

Unless we, the American people, unite around this shared inheritance, the turmoil and strife engulfing our nation will only escalate. The flag does not, and must not, represent only some of us.

Too many have fought, sacrificed, and died in defense of America for this to be so. Indeed, we should reject those who would divide a people connected by such bonds of fellowship and common purpose.

William Carney directly experienced some of the worst failings of America. Yet, on that day in 1863, he showed us all that our great and gallant experiment in freedom is still worth fighting for.

In both good times and bad, the flag has served as a rallying cry that the American people will never let it touch the ground in defeat.

From the surface of the moon to the rubble of the World Trade Center, the flag proclaims that the promise of America will never die so long as there is one William Carney left to defend it.

That is why we stand.