Trump Considers a Cut in the Capital Gains Tax 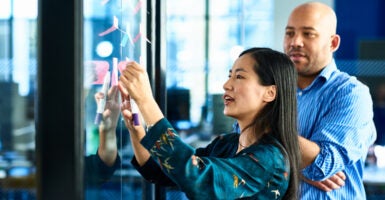 Freeing up domestic capital and reducing the tax penalty for entrepreneurs have the potential to be particularly helpful as the economy retools after this health crisis. (Photo: 10'000 Hours/Getty Images)

President Donald Trump has suggested cutting the capital gains tax as part of the economic recovery from COVID-19. And indeed, cutting capital gains taxes could help spur new businesses, increase the availability of funds for existing businesses, and encourage innovation and entrepreneurship.

Reducing taxes on capital gains also could be a good thing for the recovery from the pandemic, but doing it right will be important.

Without decisive spending cuts, the threat of future tax increases will erode the benefits of near-term tax cuts and other policy options may be better suited to support the recovery.

When you sell an investment, such as a share of a company, the government charges a capital gains tax on the increased value. The top long-term capital gains rate currently is 23.8%, with lower rates for lower income levels.

Investment income is taxed twice: once when you earn it as wages, and a second time on any investment earnings. If your money is invested in a corporation, the corporate income tax takes another slice of your investment.

This system makes it more expensive to invest in the future and encourages Americans instead to spend their money today, which reduces overall levels of investment and economic growth.

Our tax code’s built-in bias against saving for the future is partially mitigated by having a lower tax rate on capital gains and dividends than the top income tax rate of 37%. The lower rate is a necessary, pro-growth feature of our tax code. A key promise of Democrats is to tax capital gains as ordinary income, raising the tax significantly.

Because the capital gains tax is assessed at the time of realization–when the asset is sold–it creates an incentive to hold the asset to defer paying taxes. This has the side effect of encouraging investors to hold appreciated assets longer than they otherwise would for fear of having to pay tax on the gain, creating a “lock in” effect.

This “lock in” has real economic costs when investors hold assets due to fear of taxes rather than belief in a smart investment choice.

These “malinvestments” mean that Grandma still might be holding onto that $100 of Disney stock she bought in 1957 when the company went public. Her investment is now worth over $300,000 and if she cashed out, she could owe more than $70,000 in taxes.

Maybe her dollars might be invested better in her granddaughter’s small business. Or perhaps a different publicly traded company.

Lock in and double taxation mean that high capital gains taxes reduce companies’ ability to raise funds for new investments through equity offerings. They also impose higher taxes on riskier investments, such as startups that run large losses in the initial years with a small probability of successfully making a profit in the future.

Freeing up domestic capital and reducing the tax penalty for entrepreneurs have the potential to be particularly helpful as the economy retools after this current crisis.

The current high capital gains rate actually could be costing us revenue. The anti-realization incentives of the tax are so strong that under conservative estimates from Congress’ Joint Committee on Taxation, the revenue- maximizing tax rate is 28.5%.

The revenue-maximizing rate should not be confused for any measure of economic efficiency. Ideally, the tax rate on capital income should be zero. Anything above zero unnecessarily reduces jobs and productivity growth. This harms not just the investors but workers and consumers too.

The capital gains tax also applies to inflationary gains. Inflation isn’t a big deal for the investor who has seen high returns. In our Disney example, less than $1,000 of the $300,000 gain is inflation. But most investments don’t have such great returns.

Poorer-performing investments can be swamped by inflation. In some cases, the effective capital gains rate can be more than 100% during times of high inflation on low return assets. The Tax Foundation estimates that about a third of unrealized household gains are inflationary.

To this aim, Trump previously has talked about the need to index capital gains to inflation so that the tax system stops taxing these phantom gains. Indexing capital gains would increase fairness and could unlock meaningful new domestic investment resources.

Indexing capital gains should be done carefully through the legislative process, since the Constitution empowers only Congress to enact new tax policy. The Justice Department’s Office of Legal Counsel agrees “that Treasury does not have legal authority to index capital gains for inflation by means of regulation.”

Leaving new legislation to Congress is not only what the Founders envisioned but also has the economic benefit of being more permanent, which is essential to gaining the full benefit of any tax policy.

Congress may want to index other parts of the tax code to avoid opportunities for gaming and ensure administrative simplicity. This requires careful deliberation.

Congress also must weigh the economic benefits of different kinds of tax cuts. Reforms such as expensing and corporate income tax cuts can provide larger economic gains per dollar of reduced revenue.

A capital gains tax cut or indexing also will have little long-run effect if Congress does not also pair the reform with significant spending cuts.

Projected annual deficits of $2 trillion over the next decade will force Congress to cut spending, increase taxes, or risk fiscal collapse. Without decisive spending cuts, any tax cut is destined to be temporary.

Reducing taxes on capital gains could be a good thing. But without spending reforms, the necessity of higher taxes in the future likely will blunt the impact of otherwise good tax policy.