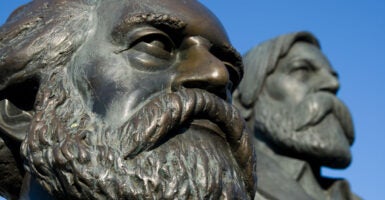 Karl Marx and Friedrich Engels are revered by leftists, but the few on the left know or care about their racist and anti-Semitic views. Pictured: a monument to Marx and Engels in Berlin. (Photo: m-1975/Getty Images)

Most people who call themselves Marxists know very little of Karl Marx’s life and have never read his three-volume “Das Kapital.”

Volume I was published in 1867, the only volume published before Marx’s death in 1883. Volumes II and III were later edited and published in his name by his friend and collaborator Friedrich Engels.

Most people who call themselves Marxists have only read his 1848 pamphlet “The Communist Manifesto,” which was written with Engels.

Marx is a hero to many labor union leaders and civil rights organizations, including leftist groups like Black Lives Matter, Antifa, and some Democratic Party leaders. It is easy to be a Marxist if you know little of his life. Marx’s predictions about capitalism and the “withering away of the state” turned out to be grossly wrong.

What most people do not know is that Marx was a racist and an anti-Semite.

When the U.S. annexed California after the Mexican-American War, Marx wrote: “Without violence nothing is ever accomplished in history.” Then he asked, “Is it a misfortune that magnificent California was seized from the lazy Mexicans who did not know what to do with it?”

Engels added: “In America we have witnessed the conquest of Mexico and have rejoiced at it. It is to the interest of its own development that Mexico will be placed under the tutelage of the United States.”

Many of Marx’s racist ideas were reported in “Karl Marx, Racist,” a book written by Nathaniel Weyl, a former member of the U.S. Communist Party.

In a July 1862 letter to Engels, in reference to his socialist political competitor, Ferdinand Lassalle, Marx wrote:

It is now completely clear to me that he, as is proved by his cranial formation and his hair, descends from the Negroes from Egypt, assuming that his mother or grandmother had not interbred with a nigger. Now this union of Judaism and Germanism with a basic Negro substance must produce a peculiar product. The obtrusiveness of the fellow is also nigger-like.

In 1887, Paul Lafargue, who was Marx’s son-in-law, was a candidate for a council seat in a Paris district that contained a zoo. Engels claimed that Paul had “one-eighth or one-twelfth nigger blood.”

In an April 1887 letter to Lafargue’s wife, Engels wrote, “Being in his quality as a nigger, a degree nearer to the rest of the animal kingdom than the rest of us, he is undoubtedly the most appropriate representative of that district.”

Marx’s anti-Semitic views were no secret. In 1844, he published an essay titled “On the Jewish Question.” He wrote that the worldly religion of Jews was “huckstering” and that the Jew’s god was “money.” Marx’s view of Jews was that they could only become an emancipated ethnicity or culture when they no longer exist.

Just one step short of calling for genocide, Marx said, “The classes and the races, too weak to master the new conditions of life, must give way.”

Marx’s philosophical successors shared ugly thoughts on blacks and other minorities. Che Guevara, a hero of the left, was a horrific racist. He wrote in his 1952 memoir “The Motorcycle Diaries”: “The Negro is indolent and lazy and spends his money on frivolities, whereas the European is forward-looking, organized, and intelligent.”

British socialist Beatrice Webb griped in The New Statesmen about declining birthrates among so-called higher races, which would lead to “a new social order” that would be created “by one or other of the colored races, the Negro, the Kaffir, or the Chinese.”

The Soviets espoused the same “Jewish world conspiracy” as the Nazis. Josef Stalin embarked upon a campaign that led to the deaths of Jewish intellectuals for their apparent lack of patriotism.

By the way, the Soviet public was not told that Marx was Jewish. Academics who preach Marxism to their classes fail to tell their students that his ideology has led to the slaughter of tens of millions of people. What’s worse, they fail to even feign concern over this fact.

White liberals are useful idiots. Black Lives Matter, Antifa, and other progressive groups use the plight of poor blacks to organize left-leaning, middle-class, college-educated, guilt-ridden suburbanite whites. These people who topple statues and destroy public and private property care about minorities as much as their racist predecessors.

Their goal is the acquisition and concentration of power and Americans have fallen hook, line, and sinker for their phony virtue signaling.