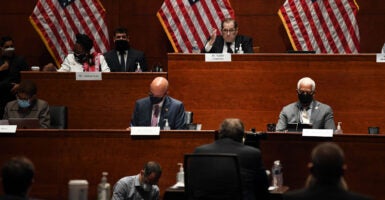 The two biggest events of 2020 have exposed a frightening fact: A passing grade in civics class wasn’t a prerequisite for many of our political leaders to get elected to public office.

Their embarrassing ignorance about the roles of state and local governments versus the federal government when it comes to handling riots and pandemics shows that they desperately need a refresher course in American Federalism 101.

That ignorance was recently on display as Attorney General William Barr testified before Congress about the administration’s decision to send federal law enforcement agents into Portland, Oregon, and other cities to tamp down violent riots.

In the hearing, Rep. Pramila Jayapal, D-Wash., accused the attorney general of taking an aggressive approach in Portland and elsewhere because the administration sent federal agents there to stop rioters while failing to break up protests in the spring against Michigan Gov. Gretchen Whitmer and her stay-at-home orders.

Jayapal claimed that the difference in responses was racially motivated, saying:

When white men with swastikas storm a government building with guns [in Michigan], there is no need for the president to ‘activate you’ because they’re getting the president’s agenda done. When black people and people of color protest police brutality, systemic racism, and the president’s own lack of response to those issues, then you forcibly remove them with armed federal officers.

Aside from the fact that no one actually “stormed” the Capitol in Michigan and that the Michigan protests never devolved into violence or destruction like the riots in Portland, Jayapal displayed a stunning lack of understanding of how her own government works.

Ditto for her other colleagues like Rep. Jamie Raskin, D-Md., who said to Barr: “You did not send in a secret police force on horseback to unleash tear gas, pepper spray, and rubber bullets against these protesters storming the state Capitol of Michigan … No, you embraced it.”

Apparently, our federal officials don’t understand that the attorney general is responsible for protecting federal assets, not state property, and that Michigan authorities are responsible for handling Michigan protests, so long as federal laws aren’t broken.

Federal agents can only carry out counter-riot operations if they’re protecting federal property or if they’re invited by state or local law enforcement to assist them. Neither condition existed in Michigan.

Unfortunately, Jayapal and other members so frequently interrupted the attorney general during the hearing and “reclaimed their time” before he could answer their questions that they missed a much-needed lesson on how their government operates.

Hearings are supposed to be a time to hear from witnesses. That’s why they’re called “hearings.” With all the showboating, not only did members of Congress miss the civics lesson, the American people and the truth were done a great disservice.

But such ignorance about the divided roles of governments wasn’t limited to last week. It’s been on vivid display during the pandemic, too.

The American people have watched as certain governors have repeatedly blamed the federal government for failing to do enough to combat the virus when, in reality, many of the responsibilities actually rest with the governors themselves.

While many people incorrectly assume that the federal government is the all-powerful fixer of everything, in fact, states have the power to declare mask-wearing mandates, shutdowns, reopening schedules, and other temporary edicts to curb the spread of the virus. The federal government’s role is more one of providing things like coordination, data on the spread, funding, and regulatory relief to remove obstacles to effective response.

In many states, though, we’ve seen the separation of powers properly play out. The pandemic has shown the advantages of having divided authority versus a more centralized, one-size-fits-all national government approach. America’s federalist system has enabled a flexible approach to responding to a virus that has had widely varying effects in communities across the country.

In our republic, the federal government was never supposed to have all the power or make all the decisions. The states—being closer to the people—are more responsive and accountable to their constituents and can better govern according to the needs of their populations.

Those on the left want it both ways, however. They want the federal government to be big and far-reaching when it’s doing things they like but weak and impotent when it comes to performing roles they don’t like, such as preserving law and order when those they politically align with are working to upend it.

Maybe it’s time that they crack open a civics book so they can understand the genius that made the American system the envy of the world. Perhaps if they understood it better, they would be less inclined to side with those who actually want to destroy the fruits it has created.

Originally published by the Hartford Courant