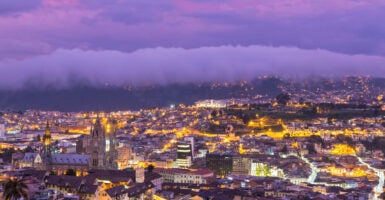 Ecuador’s economy has been hard-hit by the coronavirus, creating concerns that voters will elect a socialist candidate in the February 2021 election. Pictured: Quito, Ecuador’s capital. (Photo: Westend61/Getty Images)

Ecuador dramatically rose in rank in the 2020 edition of The Heritage Foundation’s annual Index of Economic Freedom. With an economic freedom score of 51.3 out of 100, it is the freest it has been in a decade.

While the country’s economy is still considered mostly unfree, its recent progress is good news for centrist President Lenín Moreno, who has been in power since 2017.

Nevertheless, the ongoing pandemic is having a devastating impact on the economy.

On top of that, Moreno has also been saddled with rescheduling the massive sovereign debt he inherited from his predecessor, Rafael Correa.

Interest payments on that debt have reduced Moreno’s ability to spend more on social services and other needs in response to the pandemic.

These twin crises have challenged the resolve of Ecuadorians to stay on the positive course Moreno has charted, or revert to a Correa-like socialist candidate in the February 2021 election.

The latter course would be a mistake.

The socialist policies of Correa, an acolyte of Hugo Chávez, plunged the country into the bottom ranks of the index, alongside economically repressed countries like Iran, Zimbabwe, and Cuba.

Ex-president Correa borrowed heavily, using the country’s oil wealth as collateral. He was able to get away with his hard-left push because, according to The Economist, he had the advantage of being in power during the commodity boom, enabling him to double the size of the state using windfall oil revenue.

However, while the Correa government did invest some of the money in infrastructure, “much went on expanding public employment and much was simply wasted or stolen,” as The Economist reported.

Prior to the pandemic, the economy had been slowly regaining its footing from the damage inflicted on it by the Correa administration’s decade in power, thanks in part to reforms made by Moreno.

That program required the government to reduce fuel subsidies, an effort for which Moreno was punished politically when riots broke out in October 2019.

In addition to being fiscally responsible, Moreno also deserves credit for trying to improve Ecuador’s trade freedom (one of its better-performing index indicators). He has sought free trade agreements with Mexico and the U.S., and accession to the regional Pacific Alliance trade bloc.

Unfortunately, the COVID-19 crisis has slowed progress on those initiatives.

According to Reuters, the country’s central bank forecasts that Ecuador’s economy could contract by as much as 9.6% in 2020 “due to the coronavirus pandemic, a drop in the price of crude oil, and a fall in remittances.”

The big question now for Ecuador is whether a centrist candidate in the mold of Moreno can win in the February 2021 presidential election. If that happens, the country can resume its upward trajectory for greater economic freedom.

That positive scenario received big boost this week, when the government and its international creditors reached a landmark agreement to restructure its $17.4 billion sovereign debt.

As the Financial Times reported, the “deal will give the Andean nation partial debt relief on $10 billion over the next four years and another $6 billion between 2025 and 2030. Bondholders will accept a haircut of 9% on capital repayments, saving Ecuador more than $1.5 billion.”

Now that a deal is in place with private creditors, Ecuador and the International Monetary Fund can move forward on negotiating a new, larger lending agreement (to replace the earlier one) that will enable the government to address short-term, pandemic-related needs as well as longer-term structural reforms.

If, on the other hand, a Correa-like leftist/populist candidate wins next year, Ecuadorians can expect to see their country slide backward—toward economic repression and lost opportunities.