Baseball Season, Our Distorted View of COVID-19, and What the Facts Tell Us 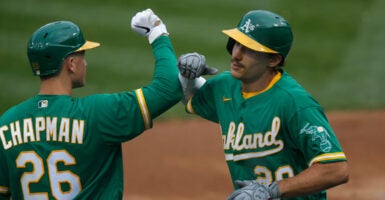 A pro baseball player is more likely to die in a bus accident on the way to a game than because of the coronavirus. Pictured: The Oakland Athletics' Matt Olson, right, celebrates with teammate Matt Chapman after Olson's two-run home run in the bottom of the first inning Wednesday against the Texas Rangers at Oakland-Alameda County Coliseum. (Photo: Lachlan Cunningham/Getty Images)

If you’re not convinced that Americans have been sold a distorted view of COVID-19 risk, consider Major League Baseball.

Most of the league’s players are among the 46 million Americans between ages 25 and 34. A total of 992 people in this age group have died with COVID-19, according to the Centers for Disease Control and Prevention. That’s a mortality rate of 2 per 100,000.

The Centers for Disease Control and Prevention estimates that 5,569 people between 25 and 34 died in traffic accidents in 2018, suggesting that a pro baseball player is more likely to die in a bus accident on the way to a game than because of the coronavirus.

Players are tested frequently. Those who test positive are isolated. Those with whom they’ve come into contact also are tested.

And yet MLB Commissioner Rob Manfred is facing calls to cancel the season because some players have tested positive for the illness despite these extraordinary precautions.

COVID-19 is a highly contagious disease. It spreads rapidly, even in communities under lockdown orders and in major league clubhouses, where strict rules prevail. We can’t eliminate the risk of infection.

COVID-19 is a serious disease primarily for the elderly, especially those in nursing homes, and those with certain medical conditions.

Younger people have gotten seriously ill from the disease and some have died, but the consequences of infection are vastly different for a 75-year-old than for a 25-year-old or a 15-year-old or a 5-year-old.

Consider these data points from the Centers for Disease Control and Prevention:

Although the picture is not so bleak for younger people, it is very different for seniors, especially those living in nursing homes.

For whatever reason, most public officials and news outlets seem incapable of distinguishing between the risk of getting infected—which affects all age groups more or less equally—and the risk of serious illness and death—which is predominantly a problem among the elderly.

Not only has this failure needlessly created widespread panic, but it has slowed, and sometimes prevented, the provision of more targeted public health interventions needed by those most at risk.

A recent study by Massachusetts Institute of Technology economists concluded that targeting interventions to those most at risk is the optimal policy approach:

We find that optimal policies differentially targeting risk/age groups significantly outperform optimal uniform policies, and most of the gains can be realized by having stricter lockdown policies on the oldest group. … Targeted policies that are combined with measures that reduce interactions between groups and increase testing and isolation of the infected can minimize both economic losses and deaths in our model.

Government officials stubbornly have promoted uniform policies of widespread lockdowns, shunning policies tailored to the age-related risk disparities of COVID-19. They have perpetrated a distorted view of COVID-19 risk on tens of millions of Americans, stoking a climate of fear instead of rationality.

Major League Baseball so far has resisted demands to cancel its season, preserving the hope that reason may yet prevail in our pandemic response.