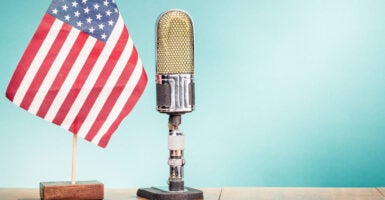 Employees of the U.S. Agency for Global Media "have not been properly vetted, yet currently have access to government systems, facilities, and, in some cases, sensitive or classified information,” a new report says. (Photo: BrAt_PiKaChU/Getty Images)

The embattled agency that oversees Voice of America and other federally funded media outlets has failed for a decade to adequately vet staff, creating a systemic security risk, a new government audit says.

The joint report by the Office of Personnel Management and the Office of the Director of National Intelligence was released Tuesday by Michael Pack, whom the Senate recently confirmed as CEO of the U.S. Agency for Global Media.

The agency, known as USAGM and previously called the Broadcasting Board of Governors, has gone through a string of scandals in recent years.

From 2010 to 2020, the Agency for Global Media—which is part of the State Department—repeatedly ignored common national security protocols and other essential practices in government human resources, the audit report says.

The identities and backgrounds of about 1,500 employees of the agency—around 40% of its workforce—are not fully known, according to the findings.

“We provided USAGM with a list of 1,527 investigations USAGM conducted under expired delegated authority, to assist them in identifying the individuals who require a new investigation,” the report states, adding:

As of our February 2020 onsite [visit], USAGM has only scheduled investigations for 314 individuals. USAGM’s failure to schedule new investigations as required poses a serious risk to the agency and the federal government as a whole. USAGM employees have not been properly vetted, yet currently have access to government systems, facilities, and, in some cases, sensitive or classified information. More importantly, USAGM employees wishing to change jobs could have their investigations reciprocally accepted by a new agency, which would not know the investigations (and subsequent favorable adjudication) were invalid.

The new report comes after a week that highlighted the scandal-plagued agency’s problems.

>>> Commentary: ‘Severe, Fundamental Security Failures’ in This Federal Agency Need to Be Investigated

Also last week, a former contracting officer with the broadcasting agency pleaded guilty to conspiracy to defraud the United States through bribery and wire fraud.

Pack has called for Congress to review similar security issues at the agency. President Donald Trump nominated Pack to clean up the agency.

USAGM recruits and employs a considerable number of foreign nationals, but unlike the State Department or Defense Department, it hires nationals from authoritarian nations that are adversaries of the United States.

Contractors and employees received security and suitability clearances even though the agency’s delegated authority to conduct investigations expired in 2012.

In some cases, USAGM took fingerprints but neglected to submit them to appropriate investigative authorities or didn’t take fingerprints altogether, according to the findings. In other cases, the agency used aliases and fake Social Security numbers for employees. In other cases, it hired individuals who left their background and security forms blank.

“I’m truly glad that attention is being directed toward the abuse of power and security risks by Michael Pack and the OPM, but we need Congress to step in and take a look,” said Helle Dale, a veteran journalist who is senior fellow in public diplomacy at The Heritage Foundation and has advocated reforms at the agency.

The Office of Personnel Management and the Office of the Director of National Intelligence completed similar reviews of the broadcast agency in 2012, 2014, and 2019, each time determining that it failed to meet the standards it promised to follow in the previous review.

The inspector general revealed in 2014 that the agency awarded contracts based on personal connections and hired contractors without prior approval, inappropriately spending hundreds of thousands of dollars.

Although reforms to the agency have faced pushback from its officials as well as from Democrats on Capitol Hill, the review process for the troubled agency long predates Pack’s tenure, a senior agency official told The Daily Signal.

In part because of the problems, President Barack Obama in 2016 signed into law a measure to consolidate oversight of U.S. nonmilitary broadcasting in the hands of a single chief executive. Pack is the first Senate-confirmed CEO.

In 2017, Voice of America disciplined three Chinese journalists working for VOA’s Mandarin service, siding with China’s government and killing a broadcast with an interview critical of the Chinese Communist Party.

“The vetting does have real consequences, since now we are in a semi-cold war with China,” Dale said.

In 2018, the government fired or disciplined 15 VOA journalists for accepting bribes from a Nigerian government official. The bribes came in “brown envelopes,” according to the audit.

Last year, the agency suspended a reporter and a cameraman amid allegations they faked a mortar attack in Nicaragua.