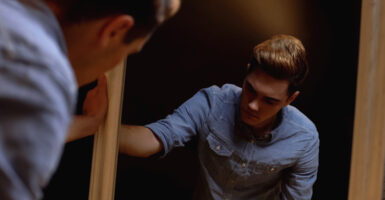 In the words of the authors of a research paper on transgender individuals and sex-reassignment surgery, “the results demonstrated no advantage of surgery in relation to subsequent mood or anxiety disorder-related health care.” (Photo: Motortion/Getty Images)

The world’s largest dataset on patients who have undergone sex-reassignment procedures reveals that these procedures do not bring mental health benefits. But that’s not what the authors originally claimed. Or what the media touted.

In October 2019, the American Journal of Psychiatry published a paper titled “Reduction in Mental Health Treatment Utilization Among Transgender Individuals After Gender-Affirming Surgeries: A Total Population Study.” As the title suggests, the paper claimed that after having had sex-reassignment surgeries, a patient was less likely to need mental health treatment.

Well, over the weekend, the editors of the journal and the authors of the paper issued a correction. In the words of the authors, “the results demonstrated no advantage of surgery in relation to subsequent mood or anxiety disorder-related health care.”

But it’s actually worse than that. The original results already demonstrated no benefits to hormonal transition. That part didn’t need a correction.

So, the bottom line: The largest dataset on sex-reassignment procedures—both hormonal and surgical—reveals that such procedures do not bring the promised mental health benefits.

In fact, in their correction to the original study, the authors point out that on one score—treatment for anxiety disorders—patients who had sex-reassignment surgeries did worse than those who did not:

You would think patients suffering from gender dysphoria would want to know that.

What led to the correction? A deluge of criticisms and letters to the editor.

One of the first scholars to raise questions about the original study was Mark Regnerus, a professor of sociology at the University of Texas at Austin.

Writing at Public Discourse (the Journal of the Witherspoon Institute, which I edit), Regnerus praised the study for having such a robust dataset. But he pointed out oddities in the way the authors presented the results to the public, and which results the media touted.

For example, Regnerus highlighted that “the study found no mental health benefits for hormonal interventions in this population.”

He also pointed out that in a dataset of 9.7 million people, the results of the original analysis the authors put forward hinged on the outcomes of just three people:

The study’s trumpeted conclusion may hinge on as few as three people in a data collection effort reaching 9.7 million Swedes, 2,679 of whom were diagnosed with gender incongruence and just over 1,000 of whom had gender-affirming surgery.

Furthermore, Regnerus noted how small the impact of any given surgery was, that a clinic would need to perform 49 surgeries before it could expect a patient to benefit—hence the plural in the original paper’s title: surgeries.

As Regnerus put it, “the beneficial effect of surgery is so small that a clinic may have to perform 49 gender-affirming surgeries before they could expect to prevent one additional person from seeking subsequent mental health assistance.”

Given all of these concerns, why the media celebration of the study? Why the “consensus” among the medical elite that transitioning benefits patients? Why the claim that it’s the only acceptable treatment?

Why are children being “transitioned”? And why are parents being told puberty-blocking drugs, cross-sex hormones, and surgeries are the only way to treat their children?

As I pointed out two years ago in my book “When Harry Became Sally: Responding to the Transgender Moment,” the best therapies focus on helping people accept and embrace their bodies. Rather than attempting to do the impossible—“reassigning” bodies to line up with misguided thoughts and feelings—we should at least attempt what is possible: helping people to align their thoughts and feelings with reality, including the reality of the body.

It shouldn’t surprise us that the results of this most recent study—and its correction—show that hormonal and surgical transition procedures don’t bring the promised benefits. Even the Obama administration admitted that the best studies do not report improvement after reassignment surgery.

In August 2016, the Centers for Medicare and Medicaid wrote that “the four best designed and conducted studies that assessed quality of life before and after surgery using validated (albeit non-specific) psychometric studies did not demonstrate clinically significant changes or differences in psychometric test results after GRS [gender reassignment surgery].”

What does that mean? A population of patients is suffering so much that these patients would submit to amputations and other radical surgeries, and the best research the Obama administration could find suggests that these surgeries bring them no meaningful improvements in their quality of life.

And sadly, such surgeries can have deadly consequences. In a discussion of the then-largest and most robust study on sex reassignment, the Centers for Medicare and Medicaid Services pointed out: “The study identified increased mortality and psychiatric hospitalization compared to the matched controls. The mortality was primarily due to completed suicides (19.1-fold greater than in control Swedes).”

These results are tragic. And they directly contradict the most popular media narratives, as well as many of the snapshot studies that do not track people over time. Indeed, the Obama administration noted that “mortality from this patient population did not become apparent until after 10 years.”

So when the media tout studies that track outcomes only for a few years, and claim that reassignment is a stunning success, there are good grounds for skepticism. Indeed, it will be interesting to see which media outlets report on this past weekend’s correction—and the true results of the study.

As I point out in “When Harry Became Sally,” gender dysphoria is a serious condition. People who experience a gender identity conflict should be treated with respect and compassion. And they deserve to know the truth.

Now the world’s largest relevant dataset reveals hormones and surgeries don’t bring wholeness and happiness. We need to find better, more humane, and effective responses to those who experience dysphoria.