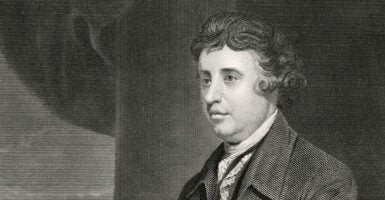 Gregory Collins is a postdoctoral associate and lecturer in the Program on Ethics, Politics, and Economics and the department of political science at Yale University. This article is adapted from his book on Edmund Burke’s economic thought, "Commerce and Manners in Edmund Burke’s Political Economy,” recently published by Cambridge University Press.

As Edmund Burke explained in his famous speech on Anglo-American relations, “Speech on Conciliation with America,” the interests of Britain and those of the Americans were connected together by the harmonizing chords of commerce.

He rests this position on his belief, as discussed in “Thoughts and Details on Scarcity” (his primary economic tract) and demonstrated by the Free Port Act of 1766, that the exchange of goods generated mutual benefits for the transacting parties.

[I]s not this American trade an unnatural protuberance, that has drawn the juices from the rest of the body? The reverse. It is the very food that has nourished every other part into its present magnitude.

Our general trade has been greatly augmented; and augmented more or less in almost every part to which it ever extended.

Burke is seeking to refute the zero-sum orthodoxy of observers suspicious of intercourse between England and America. In his view, the growth in colonial trade did not lead to the correspondent reduction in British commerce; rather, it coexisted with the latter’s attendant rise as a global economic power.

Remember, of course, that the operation of the Navigation Acts persisted in the 18th century, indicating that this commercial burst did not occur in an environment stripped of all trade restrictions.

In the historical context of “Speech on Conciliation,” however, Burke’s larger point is directed at those ministries and legislators intent on advocating schemes of taxation in order to extract greater revenue from the Colonies: Concessions to the Americans would not sanction the destruction of British trade, for the economic vibrancy of the former smoothly complemented and accented the commercial spirit of the latter.

Such economic co-dependency meant that any attempt to injure the Colonies would bring hazardous effects upon Britain itself.

Later in “Speech on Conciliation,” for instance, Burke argues that a tax on the tobacco of Virginia would “give its death-wound to your English revenue at home, and to one of the very greatest articles of your own foreign trade.” Therefore, “If you tax the import of that rebellious Colony, what do you tax but your own manufactures, or the goods of some other obedient, and already well-taxed Colony?”

Excessive taxation of one’s trading partner would diminish the taxing power’s own opportunities to reap a profit and collect receipts for the treasury.

In general, Burke’s approach to Anglo-American foreign trade was inspired by the maxims of his economic thought in favor of commercial exchange—and by his mindful recognition of the broader implications of British imperial policy in North America and the British West Indies.

Commerce was a means for opulence and an instrument for power. Burke knew that the strengthening of Britain’s economic relationship with the Americans—a vibrant, industrious people—would not only swell England’s public riches, but also fortify its stature in the wider global order against European rivals.

Furthermore, the inflexible classification of Burke’s thought on foreign commerce in “Speech on American Taxation” and “Speech on Conciliation” as either “pro-free trade” or “pro-mercantilism” disregards the complicated nature of British imperial commercial policy in the 18th century.

The enlargement or reduction of the Navigation Acts was not simply an exercise in commercial reform; it was an exercise in imperial reform and national security reform and social reform as well, all of which carried serious consequences for the imperial constitution that had governed the British Empire for over a century.

Proposed revisions of trade regulations, then, were naturally attached to questions of politics, foreign policy, religion, culture, and English history. Resistance to the swift abolition of all trade laws, in itself, did not necessarily indicate a deeper philosophical position in support of, or in opposition to, free trade.

For Burke, however, the weight of English history was no excuse to avoid discussion about modifying existing regulations. On the contrary, the avenues to substantive reform required a discerning awareness of the trade laws that had bound the Americans to the British for years, as exemplified by Burke’s own quest to soften trade restrictions that inhibited commercial freedom—through the crafting of the Free Port Act; the recovery of the older (and less onerous) system of the Navigation Acts; and the expression of liberal economic principles in general.

“[A] sovereign who, instead of fighting the rebels in a province, lays a dead hand on the trade of his subjects, is no better than a madman,” he wrote in notes for a speech on the American war.