What We Know Now About Hydroxychloroquine to Treat COVID-19 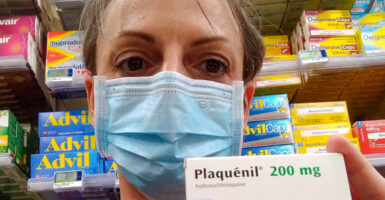 The buzz surrounding the drug hydroxychloroquine to treat COVID-19 began to die down until early July and the results of 2,500-person study. Pictured: A pharmacy employee displays a box of Plaqueni, a brand name for hydroxychloroquine, May 28 in Paris. (Photo: Marc Piasecki/Getty Images)

Early in health officials’ response to the pandemic, one drug offered hope of a safe, widely available, and cheap therapeutic that would break the death grip that COVID-19 held on the world.

However, after its promised efficacy didn’t materialize in large, statistically significant numbers, enthusiasm for the drug, hydroxychloroquine, quickly waned. Why, then, has it made its way back into the headlines?

When it was first suggested that hydroxychloroquine may be an effective antiviral against the new coronavirus, which scientists call SARS-CoV-2, the U.S. government purchased and delivered the drug by the millions of doses even before research could prove its efficacy.

At the time, what scarce data was available suggested it would work, and waiting much longer would’ve been unethical. After all, the drug has a decadeslong history of use to treat malaria.

But with those millions of doses being administered, clinicians found only mixed results. Some, as in the early French trial, found tremendous success, while many others found no clinical benefit.

Thus, the buzz surrounding hydroxychloroquine began to die down and it nearly was forgotten in the news cycle, until early July when the results of 2,500-person study were published by the Henry Ford COVID-19 Task Force.

The Ford study is a retrospective observational study, which means it looks back on cases that already have happened. These studies often can gather a large amount of data, but they tell only correlation rather than causation. Although it’s a positive study for the drug, it adds to a growing body of mixed results.

To tell definitively whether hydroxychloroquine is responsible for the reduction in mortality, what’s required is a randomized controlled trial. That is, a prospective study designed to test the direct effect of a drug or intervention.

One such randomized controlled trial was published in July in the New England Journal of Medicine, which also put hydroxychloroquine back in the news. The study, of 507 patients with confirmed COVID-19, found there was no significant difference in clinical outcome with the addition of hydroxychloroquine, either with or without azithromycin.

Patients included in this study were hospitalized but did not require more than four liters of supplemental oxygen. This means that the condition of the patients studied was of relatively low severity, and that treatment with hydroxychloroquine began earlier on in the course of the disease.

Therefore, this study was intended to test the conditions for which hydroxychloroquine has been proposed to be used and found it to have no clinical benefit over the “standard of care.”

But the researchers noted several limitations to their study. For instance, the study was not blinded, which could have skewed the results, and there was difficulty with adherence to the treatment regimen, which could have affected the outcomes.

Furthermore, hydroxychloroquine with or without azithromycin was compared to the “standard of care,” which at the time of the study, in March, was not very standard. Physicians were free to use other drugs such as steroids, immunomodulators, or other antibiotics.

As if it weren’t already confusing enough, few studies have included zinc as part of the treatment regimen along with hydroxychloroquine. Zinc is an essential mineral that is important for immune function, and may have some direct antiviral properties that some researchers propose would be amplified when used in conjunction with hydroxychloroquine.

Researchers at New York University Langone Health, a medical center, began adding zinc to their treatment plans for COVID-19 patients. In a study of 932 patient cases, the medical center found that the addition of zinc to hydroxychloroquine and azithromycin was associated with a decrease in mortality in patients who were not admitted to the intensive care unit.

Because this also was a retrospective study, it can tell only correlation and not causation.

That said, it’s a promising result that suggests hydroxychloroquine might need supplemental zinc to be fully effective. This warrants further investigation.

Few published results exist from studies that include zinc, and fewer if any results exist from a clinical trial of zinc with hydroxychloroquine. But several studies of this drug combination are in progress, some of which are expected to conclude as late as next year.

All of this is to say that the science is not yet settled. It is an open question as to whether hydroxychloroquine in combination with any number of other drugs may have a beneficial effect on the disease course of COVID-19.

Hydroxychloroquine is dominating the news again for many reasons, not the least of which is that results from several important studies recently have been released. But the angst, the controversy, and cynical politicking around the drug is completely unwarranted.

We don’t know for certain if, and in what manner, hydroxychloroquine works. We should trust clinicians to review the data for themselves, and it would behoove the media, the politicians, and the public to let the science play out.