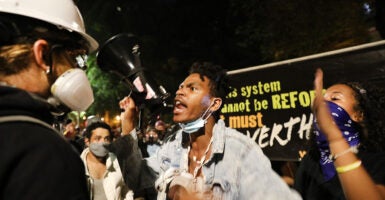 Protesters fight as they gather in protest in front of the Mark O. Hatfield Federal Courthouse in downtown Portland, Oregon, as the city experiences another night of unrest on July 28. For over 56 consecutive nights, protesters in downtown Portland have faced off in often violent clashes with the Portland Police Bureau and, more recently, federal officers. (Photo: Spencer Platt/Getty Images)

Decent Americans who are feeling perplexed today shouldn’t be ashamed about it. There is good reason to be perplexed.

On the one hand, in the name of health and safety, we are being asked by government to compromise personal freedoms that we have always taken for granted: going to work, going to church, sending our children off to school, meeting our friends in our favorite restaurant.

We walk around wearing annoying masks and try to respect social distancing limits.

But instead, we look around and see chaos. We see no uniformity.

Protests, often violent, are sweeping our cities. The same public officials who tell us to keep our kids at home; who tell us to not pray in church, as we have always prayed; who limit our places of work and livelihood look the other way, often with approval, as hooligans tear apart our cities.

Greater demands from government should mean increasing respect for the law.

But we’re seeing the opposite: government making more demands while disrespect for the law increases across the nation.

We just saw a decision in the nation’s Supreme Court where a Nevada church petition to be treated equally to Nevada’s casinos regarding COVID-19 attendance limits was rejected with no explanation.

Justice Samuel Alito got to the heart of the matter in his dissenting opinion, saying: “For months now, States and their subdivisions, have responded to the pandemic by imposing unprecedented restrictions on personal liberty, including free exercise of religion. … Now four months have passed since the original declaration. The problem is no longer one of exigency, but one of considered yet discriminatory treatment of places of worship.”

“Calvary Chapel has also brought to our attention,” continued Alito, “evidence that the Governor has favored certain speakers over others. When large numbers of protestors openly violated provisions of the Directive, such as the rule against groups of more than 50 people, the Governor not only declined to enforce the directive but publicly supported and participated in a protest.”

I am looking at a photograph of a mass of protesters marching, shoulder to shoulder, through the streets of Oakland, California, this in the same state that is limiting church attendance to 25% capacity and prohibiting singing in church.

In May, the Supreme Court rejected a challenge by South Bay United Pentecostal Church in Chula Vista, California, to the state’s restrictions on church attendance. Justice Brett Kavanaugh noted in his dissent that secular businesses like supermarkets, restaurants, and hair salons are not subject to the same restrictions as houses of worship.

A group of Orthodox Jewish Americans sued the New York governor and New York City mayor for lack of uniformity in gathering limits between houses of worship, and secular business activity, protests and demonstrations.

Going hand in hand with the rioting and violence is a nationwide surge in crime.

At the same time, there is violence and damage from protesters in Seattle, Portland, and Louisville.

We can’t have a free and civil society without law. And law means nothing if we can’t agree on what the law is and if it is not applied uniformly. Politics needs to follow law. Today’s chaos is symptomatic of law following politics.

Well-intentioned citizens cannot sacrifice their freedom in an environment like this. We must take the initiative to open our schools, our churches, and our businesses.

Amidst the chaos, citizens need to take control of their own lives. They have a civic duty to do it. It will help the nation and its recovery.