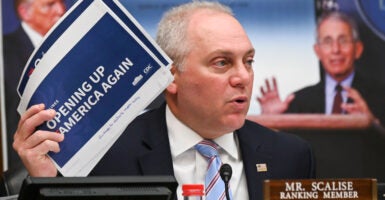 This week’s gross domestic product report painted a stark picture; namely, a historic plunge in the production of goods, provision of services, and private investment.

The nation’s economy shrank at a 32.9% annualized rate. That marks an actual decline of 9.5% from earlier this year.

Meanwhile, massive government transfer payments funded by borrowing and printing of money caused disposable personal income to soar at a 42.1% annual clip despite the loss of more than 24 million jobs accompanying this economic contraction.

The data bear out the everyday experience of millions of Americans. Government-mandated closures and people responding to what they heard from some public health officials shriveled economic output over the past six months.

Personal consumption dropped at a 34.6% annualized rate. In fact, the plunge in consumption exceeded the record rise in personal income.

Durable goods sales were down only slightly, by 1.4% annualized, thanks to a slight increase in sales of vehicles and recreational equipment. However, sales of household furnishings and equipment decreased modestly. Non-durable goods (items such as shoes, clothing, and groceries) dropped by 15.9% annualized.

Zooming out year over year, we get a clearer picture of the damage. Overall household consumption of services declined 18%. Spending on food services and accommodations (bars, restaurants, movie theaters, etc.) fell 40%.

Jarringly, spending on health care services dropped by 24.2% compared with last year as people postponed elective procedures. In some instances, treatment of serious health conditions is being delayed.

Even the surge in personal income—the bright spot in the report—is problematic. Instead of representing compensation for productive enterprise, this reflects federal stimulus checks combined with enhanced unemployment benefits of $600 weekly.

Now, 70% of the unemployed earn more off the job than on the job, and 20% earn double their prior salary. That creates a danger: There’s no reason to worry about inflation now, but eventually the Federal Reserve will have to reverse those actions and tighten.

So, what happens then? Nobody really knows, but it could be a disaster. Friday afternoon, Fitch Ratings downgraded the outlook on U.S. government debt to negative, warning of the “risks to U.S. economic dynamism and reserve currency status” from the rising debtload.  Indenturing future Americans to pay for this extravagant spending is generational robbery.

For now, Americans are saving the surplus in cash as a result of an uncertain economic future, combined with large swaths of the market being closed for business.

The personal savings rate rocketed to 25.7%, far higher than the average of under 7% over the past 30 years. Because this influx of cash is temporarily being saved rather than spent, it hasn’t resulted in an increase in inflation.

Prices declined overall in the quarter on the heels of the drop in demand. Once families start spending these savings—or the banks start lending the new deposits—inflation pressures could rapidly grow.

Unlike typical savings, these savings do not represent capital acquired from productive output. Instead, these trillions are a ticking inflation time bomb.

Unfortunately, politicians in both parties are calling for more government spending to stimulate personal consumption. Yet, the federal government and central bank have injected more than $5.5 trillion into the economy already in a series of bailouts and transfer payments. That’s nearly $17,000 for each adult and child living in the U.S.

More borrowing and money printing is not the solution to restoring consumption. So long as businesses remain forcibly closed, and people are prohibited from life activities, consumption will lag.

Look at the nearly 8 million jobs returned in May and June as Americans eagerly emerged from forced hibernation. A lifting of restrictions—not government spending—deserves credit for this partial rebound.

The report also highlights the drop in private domestic investment of 49%. Every category outside information-processing suffered a large decline, including residential and nonresidential, structures, and equipment.

Those investments are crucial to enhancing productivity, which in turn enables income earners of all levels to enjoy higher standards of living and job opportunities.

Lawmakers should keep those numbers in mind when crafting monetary and fiscal stimulus.

Our economic misery stems from the suppression by government edict of the supply of goods and services. Likewise, those same edicts artificially suppress demand as consumers remain unable to engage in commercial activity.

Masking this economic misery by racking up trillions more in debt and instructing the central bank to distribute trillions more to favored interests might be politically expedient. After all, who doesn’t want “free” money to cover business expenses or bonuses for losing a job? However, it’s irresponsible.

A full recovery requires a safe reopening rather than more fiat currency, borrowing, and government spending. Only then will we see both investment and consumption return in full force.