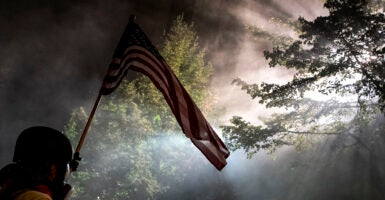 The left hates America and Israel because of their success and influence on the world. They don't hate the Arab world, which enslaved far more blacks than the North and South Americas combined. Pictured: A demonstrator holding an American flag stands in a cloud of tear gas outside the Mark O. Hatfield Federal Courthouse during a night of protest against racial injustice, police brutality, and the deployment of federal troops to U.S. cities on July 29 in Portland, Oregon. (Photo: Alisha Jucevic/AFP/Getty Images)

What are the two most hated countries in the world?

Who hates both America and Israel?

The left (and Islamists).

And why is that? Why does the left (not liberals, the left) hate America and Israel?

In “Why the Jews?: The Reason for Antisemitism,” a book I co-authored with Rabbi Joseph Telushkin in 1983 (the latest edition was published in 2016), we compared hatred of America with hatred of Jews.

This is what we wrote. It precisely explains what is happening in America today:

Perhaps the best way to understand the admiration and resentment elicited by the quality of Jewish life is to compare the reactions of the world to America’s quality of life. No other country has so many people seeking to move there. At the same time, no country, with the exception of Israel, is the target of so many hateful and false attacks.

The United States, because of its success and its ideals, challenges many people throughout the world. How did America, a nation composed largely of those rejected by other societies (‘The wretched refuse of your teeming shore’ declare the words at the base of the Statue of Liberty), become the most affluent, freest, most powerful, and most influential society in the world?

Americans generally attribute this success to the values of America’s founding generations (such as individual liberty, religious tolerance, Judeo-Christian morality, and secular government), to a work ethic, and to the subsequent waves of immigrants who embraced these values.

Others claim that through capitalist exploitation, America cheated poorer countries, paralleling charges that Jewish success has been attained through economic ‘bloodsucking.’ Still others develop an imperialist version of America’s past and present, similar to the anti-Jewish charge of a world Jewish conspiracy.

But the United States is hardly the only society with great natural resources, and it has been the least imperialistic of the world’s powers. America’s values, not unfair resource distribution or world exploitation, have made the United States better, just as Judaism and its values, not genetic advantage or economic conspiracies, account for the quality of life led by Jews. The two people’s quality of life has provoked similar reactions—many admire them, and many resent them.

Just like the Jews, America is hated because it is successful. For over a century, it has been the most successful country in the world—in virtually every way.

If having had slavery was a real issue in the left’s anti-Americanism, the left would hate the Arab world and Latin American countries such as Brazil more than it hates the United States.

While The New York Times and other left-wing institutions are preoccupied with slavery in America, they ignore—out of ideological nonconcern or out of sheer ignorance—the vastly larger number of Africans enslaved by Muslim and South American nations.

Of the more than 12 million African slaves shipped to the Western Hemisphere, only about 3%—between 306,000 and 380,000—were sent to the United States. The other 97% were sent to the Caribbean and Brazil. And the slaves in the U.S. South lived longer and made larger families than the slaves of Latin America.

Yet, the U.S. is singled out for hatred. Why? Because the left doesn’t resent Brazil. Brazil is not an object of envy.

Likewise, there is no left-wing hatred of the Arab world, which enslaved far more blacks than the North and South Americas combined. The internationally recognized expert on African history, Senegalese anthropologist Tidiane N’Diaye, wrote:

Most people still have the so-called Transatlantic [slave] trade by Europeans into the New World in mind. But in reality the Arab-Muslim slavery was much greater. … The Arab Muslims were the most murderous of all those involved in the slave trade.

Part of that murderous treatment of African slaves involved castrating the males so they could not reproduce. And the women and girls were traded as sex slaves.

Where is the leftist anger at the Arab and Muslim world? There is, of course, none. On the contrary, the left protects the Muslim and Arab world against moral criticism.