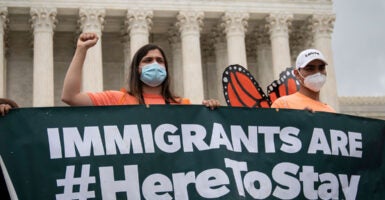 History proves that promises of amnesty beget more illegal immigration. The White House's decision to extend DACA will result in just that. Pictured: The program's beneficiaries and supporters rally June 18 outside the Supreme Court, which that day denied, 5-4, the Trump administration's attempt to end the Deferred Action for Childhood Arrivals. (Photo: Drew Angerer/Getty Images)

The White House announced Tuesday that it will extend amnesty protections for at least another year for illegal aliens protected by the program called Deferred Action for Childhood Arrivals, or DACA.

In the interim, the Trump administration will conduct another review of the DACA program to address the Supreme Court’s recent 5-4 decision on it.

The Obama administration created this illegal program in 2012. DACA currently protects more than 649,000 illegal aliens, brought here as children, from deportation from the United States.

Despite stating in its recent decision that the Trump administration could rescind DACA, the Supreme Court seemingly used the Administrative Procedure Act as a pretense to keep the Obama administration’s program alive.

In layman’s terms, the high court’s majority said that the Trump administration did not offer a sufficient justification for ending the program and failed to fully take into account the concerns of illegal aliens who benefitted from the program, to include their reliance upon its continuance.

The dissenting justices argued, persuasively in our view, that DACA was blatantly illegal to begin with, which was a good enough reason to end it.

Upon release of the Supreme Court’s ruling, The Heritage Foundation stated that the administration “should refuse to renew amnesty for any DACA beneficiaries as their deferral periods end.”

This should have been done as the administration quickly issued a new, permanent rescission of the program, taking into account the concerns addressed by the high court. Instead, the administration has extended the amnesty protections for at least another year, pending a review of an indeterminate period.

History has proven that promises of amnesty beget more illegal immigration. The decision announced Tuesday by the White House will result in just that.

A review of an indeterminate period is bad news for conservatives who have supported the Trump administration’s efforts to end DACA. It leaves open the very real possibility that the review will not be concluded in time to effectuate ending DACA and could potentially leave that effort in the hands of a subsequent administration that wants to preserve and expand the program.

Additionally, designing a review that is sufficient to meet the objections that the Supreme Court cited may be a fool’s errand.

So long as the Administrative Procedure Act is the favorite tool of activist judges, those judges will discover new procedures that have been violated.  Doing a longer review does not change that likely result.

The Trump administration has been aware of the plaintiffs’ procedural claims for years; it should be prepared to address these claims in short order.

Setting legal strategy aside, granting a one-year extension of DACA is extending amnesty.  Amnesty is the forgiveness of consequences for breaking immigration law.

Conservatives have every right to be demoralized by the continuation of DACA. Ending the program was a central part of then-candidate Donald Trump’s 2016 campaign. After years of internal obstruction and judicial activism, the administration seemed to be in the final stages of ending DACA once and for all.

Instead, the administration has extended the very program it has argued is unlawful.

As the Trump administration turns to executive actions on immigration, it has limited opportunity to shore up conservative support. In particular, the president should keep his promise to end the unconstitutional practice of granting birthright citizenship to the children of illegal aliens.