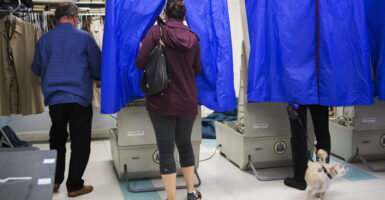 "It doesn’t surprise me that this is in Philadelphia, which is one of the worst places in the country for election fraud,” says Heritage Foundation scholar Hans von Spakovsky, a former Justice Department lawyer. Pictured: Michael Regan, right, votes with his dog, Bean, at Old First Reformed Church in Philadelphia on Nov. 8, 2016. (Photo: Jessica Kourkounis/Getty Images)

A voter fraud scandal in Philadelphia appears to be expanding with the indictment this week of a former Democratic congressman and more charges expected.

Other charges against Myers include bribery of an election official, falsification of records, voting more than once in a federal election, and obstruction of justice.

Myers, who represented Pennsylvania’s 1st Congressional District, left Congress in disgrace in late 1979 as part of the broad “Abscam” bribery scandal and, upon conviction, was sent to federal prison. After his release in 1985, he became a political consultant.

If convicted in the voter fraud case, Myers would face up to 90 years in prison, according to the Justice Department.

Myers’ indictment follows a guilty plea in May by a Philadelphia election judge, Domenick DeMuro.

The indictment alleges that Myers bribed DeMuro and others to stuff ballot boxes to benefit specific candidates in Pennsylvania’s Democratic primary elections in 2014, 2015, and 2016.

“It doesn’t surprise me that this is in Philadelphia, which is one of the worst places in the country for election fraud,” Hans von Spakovsky, a former Justice Department lawyer who was a member of the Federal Election Commission and the Presidential Advisory Commission on Election Integrity in 2017, told The Daily Signal.

“The key question now is who else did Myers pay to stuff ballot boxes for local, state, federal, and judicial candidates?” von Spakovsky, manager of the Election Law Reform Initiative at The Heritage Foundation, said. “Did any of these candidates happen to know what the money they were paying Myers was going for? Were other election officials engaged?”

Prosecutors say the voting irregularities took place over the course of three election cycles—2014, 2015, and 2016—and emerged in a referral to the Justice Department by Philadelphia City Commissioner Al Schmidt on Sept. 22, 2014.

The Philadelphia City Commission is a bipartisan, three-member board of elected officials charged with supervising elections and voter registration in the city. Schmidt is the Republican member, serving with two Democrats.

Schmidt, who could not be reached for comment Friday, made additional referrals to the Justice Department after later elections.

It may be telling that the case is being prosecuted only now, von Spakovsky told The Daily Signal:

Each voting machine at Philadelphia polling stations produces a printed receipt that documents its use, the Justice Department said. The elections judge and other election board officials at each polling place attest to the accuracy of machine results.

DeMuro pleaded guilty in May to adding votes illegally for certain candidates in primary elections.

“Votes are not things to be purchased and democracy is not for sale,” McSwain, the U.S. attorney, said in a statement. “If you are a political consultant, election official, or work with the polling places in any way, I urge you to do your job honestly and faithfully. That is what the public deserves, it is what democracy demands, and it is what my office will enforce.”

The Justice Department did not identify which candidates paid Myers for consulting work.

Myers is presumed innocent until proven guilty, of course, and The Daily Signal could find no public reports that the former congressman or his lawyers have spoken on the matter.

According to the indictment, Myers solicited “consulting fees” from clients and used portions of those funds to pay DeMuro and others to tamper with election results.

Prosecutors allege that Myers made payments to DeMuro ranging from $300 to $5,000 per election.

DeMuro admitted to adding fraudulent votes to a voting machine—a practice known as “ringing up” votes. DeMuro then would falsely certify that the returns were accurate, according to the Justice Department.

Prosecutors also allege that Myers directed DeMuro to lie to investigators about the bribes and the ballot-stuffing scheme.