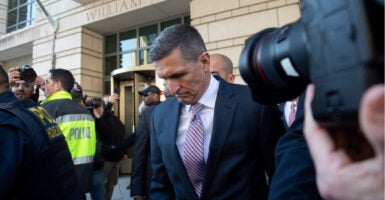 Michael Flynn’s attorney has fired another broadside at Judge Emmet Sullivan, the trial judge presiding over his case.

Flynn filed a blistering brief opposing Sullivan’s appeal to the entire D.C. Circuit Court of Appeals, in which Sullivan is asking the full court to overturn the mandamus order of a three-judge panel telling him to dismiss the prosecution of the retired Army lieutenant general.

Flynn briefly served as President Donald Trump’s national security adviser, but resigned and was subsequently charged with lying to the FBI before the Justice Department moved to dismiss the charges.

Make no mistake: Mandamus—when a superior court orders a lower court to carry out its legal duty—is an extraordinary remedy that should only be granted in exceptional cases.

Flynn’s is one such case.

It is something Sullivan should have done without an order from the D.C. Circuit.

As part of its order, the circuit court also ruled that Sullivan’s appointment of an amicus to argue against the dismissal was moot. But the appointment was a dubious move to begin with, given the Supreme Court’s recent reversal of the 9th Circuit in United States v. Sineneng-Smith for engaging in similar behavior that the justices called an “abuse of discretion.”

Judge Neomi Rao of the U.S. Court of Appeals for the District of Columbia Circuit didn’t hesitate to criticize the appointment of the amicus, saying that “[t]he district court chose an amicus who had publicly advocated for a full adversarial process” and that the amicus had relied on “news stories, tweets, and other facts outside the record” to do so.

Still, the court offered an olive branch to Sullivan, when it declined Flynn’s request to reassign the case to a different district judge to enter the dismissal.

In fact, the panel explicitly stated that “the district judge’s conduct did not indicate a clear inability to decide this case fairly.”

“We decline to reassign the case to a new judge simply to grant the government’s Rule 48(a) motion to dismiss,” Rao added.

The old saying that no good deed goes unpunished proved true on July 9, when Sullivan swatted away that olive branch and filed a petition for a rehearing en banc—essentially a request for all 11 judges on the D.C. Circuit to overturn the three-judge panel’s ruling. He did so at taxpayer expense, no less.

From a crass political standpoint, it’s a calculated gamble on Sullivan’s part.

But as Chief Justice John Roberts pointed out, “We do not have Obama judges or Trump judges, Bush judges or Clinton judges.” We have judges.

Sullivan erroneously claims that Rao’s majority opinion conflicts with a Supreme Court decision that he thinks would allow him to hold a hearing on the motion to dismiss and that the panel misapplied the D.C. Circuit’s standards for granting mandamus.

Basically, he adopts many of the dissent’s positions. In short, Sullivan claims that while he might be required to grant the motion to dismiss, nothing prohibits him from conducting a hearing and inquiring into the reasons behind the motion to dismiss, which the Justice Department has already thoroughly explained.

Given Sullivan’s past statements and behavior, it seems more likely that he really intends to conduct something more akin to an inquisition.

But Rao’s thorough opinion, which rebutted the dissent’s arguments on a point-by-point basis, made clear: “Whatever the precise scope of Rule 48’s ‘leave of court’ requirement, this is plainly not the rare case where further judicial inquiry is warranted.”

“And we need not guess if this irregular and searching scrutiny will continue; it already has,” she added.

This is legal semantics for the fact that procedural Rule 48, which requires the judge to approve the government’s motion to dismiss the prosecution, is not intended to give a judge the ability to continue a prosecution the government says is not valid.

Instead, it’s intended only to give the judge the ability to protect defendants like Flynn from harassment by a government prosecutor—for instance, by repeatedly dismissing and then refiling charges against a defendant.

That’s not the situation here at all, and nothing has changed.

Sullivan’s petition attempts to create daylight between Rao’s opinion and the precedents she relied on, but the fact is, those attempts fall short.

Flynn’s response to Sullivan’s petition also makes that point clear. He argues that Sullivan has no standing to even file the petition for rehearing; that Sullivan has ignored the “massive” amount of information in the Justice Department’s motion to dismiss; and that Sullivan couldn’t even get basic facts right, such as the date of Flynn’s mandamus petition, as well as other key aspects about the petition and the facts supporting it.

Sullivan, Flynn’s attorney says, even wrongly asserts that Flynn already had “two separate judgments of conviction,” when in fact no convictions were ever finalized or entered into the record.

As Flynn’s lawyer succinctly summarizes, “Judge Sullivan’s extraordinary actions arise solely from his disagreement with the Government’s decision to dismiss the case against General Flynn,” adding:

Not only did he wrongfully tar General Flynn with a baseless assertion of treason, but he has been vocal that General Flynn should be punished severely.

Flynn’s attorney concludes by noting, “The district court has hijacked and extended a criminal prosecution for almost three months for its own purposes.”

So, we’re really left with two questions: What are those purposes, and why does Sullivan want to continue the three-ring circus surrounding Flynn’s case?

Who knows? But it may be for no other reason than the simple fact that Sullivan mistakes his role as being a prosecutor instead of a judge and wants to continue being the ringmaster in this saga.

The actual prosecuting authorities in this case, the government, also filed a brief on July 20 arguing not only that there is no need for a rehearing by the entire appeals court because the panel got the applicable law exactly right, but also that Sullivan doesn’t even have standing to file such a request.

The D.C. Circuit should decline Sullivan’s petition for a rehearing. He should at long last grant the government’s motion to dismiss an unjustified prosecution that seems to have been ginned up by government officials to get Flynn fired from his position as Trump’s national security adviser.

It’s time to follow the lead of Ringling Bros. and Barnum & Bailey—and shut down this circus.