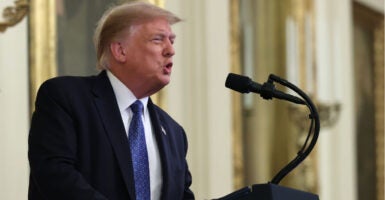 When he was 4 months old, LeGend Taliferro of Kansas City survived open heart surgery. On June 29, at just 4 years old, he was shot and killed. His killer hasn’t been found.

“Children are supposed to be our future and our 4-year-old son didn’t make it to kindergarten,” his mother, Charron Powell, said in the East Room of the White House on Wednesday for an event announcing a new anti-crime initiative named for her son.

She added, “He was exciting. He loved basketball. He was a ball of joy.”

President Donald Trump announced Operation Legend at the event amid escalating crime in major cities. The operation will include a “surge” in federal law enforcement agencies, including the FBI, the Drug Enforcement Administration, and U.S. Marshals Service, all parts of the Justice Department, and Homeland Security Investigations, a division of the Department of Homeland Security.

Later during his remarks, the president added:  “The Department of Justice will provide more than $61 million in grants to hire hundreds of new police officers in cities that are the focus of Operation Legend. We will never defund the police.”

Attorney General William Barr said federal authorities going into cities as part of Operation Legend will be different than the type of federal officials policing protests in Portland. He said instead it would be “classic crime fighting.”

“The principal danger to the lives of our inner-city communities is violent crime,” Barr said. “The leading cause of death for young black males is homicide. Each year approximately 7,500 black Americans are victims of homicide. Every one of those lives matter.”

The announcement comes as the left has pushed back against the Department of Homeland Security’s sending law enforcement agents into Portland to quell violence.

During the East Room event, three “Seeking Information” posters were displayed on the platform, one featuring LeGend Taliferro and another Jacqueline Vigil, a homicide victim from Albuquerque, New Mexico. The third featured Vernado Jones Jr., a 14-year-old  homicide victim from Chicago.