8 Acts of Vandalism, Desecration at Churches Across Nation 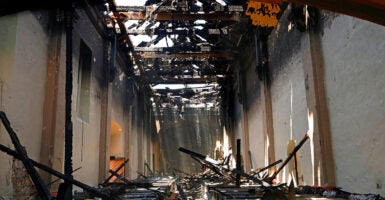 Churches throughout the United States have become victims of vandalism in recent days.

In France, police arrested a 39-year-old Rwandan refugee after a cathedral was set on fire Saturday in the city of Nantes.

Similar violence and vandalism in the U.S. follow the May 25 death of George Floyd in police custody in Minneapolis.

Since Floyd’s death, vandals and rioters across the nation have torn down or attempted to tear down dozens of statues and other monuments, including ones dedicated to Confederate Gen. Robert E. Lee and to Presidents George Washington, Abraham Lincoln, and Ulysses S. Grant (also a former Union general).

Writer, activist, and Black Lives Matter supporter Shaun King tweeted June 22: “Yes, I think the statues of the white European they claim is Jesus should also come down. They are a form of white supremacy. … Tear them down.”

Here are eight incidents of church vandalism reported in July, three of them in Florida.

Someone beheaded a statue of the Virgin Mary outside St. Stephen Catholic Church in Chattanooga, Tennessee, which happens to be on a road named Lee Highway.

The pastor of the church, the Rev. Manuel Perez, noticed July 11 that a vandal or vandals had knocked over the statue. He then discovered that the head had been cut off, but could not find it.

“Father Perez said that he looked around the church grounds to see if he could find a missing head and he couldn’t locate it,” Jim Wogan, director of communications for the Diocese of Knoxville, told the Catholic News Agency.

“What a strange time,” Bishop Richard Stika of Knoxville said on Twitter in describing the vandalism. “This is occurring at various spots throughout the United States.”

A vandal or vandals painted a satanic symbol on a door at St. Joseph Catholic Church in New Haven, Connecticut.

In a July 16 Facebook post, the Rev. John Paul Walker, pastor of the church, wrote that someone painted “words and various symbols including a satanic one …  on the outside doors of the church” between 9 p.m. July 15 and 6 a.m. July 16.

I would ask everyone in the parish to pray to Our Lord in reparation for this sacrilege, and to St. Michael for protection against all the powers of hell. Please pray, too, for the perpetrator of this action, who is clearly a very disturbed individual in need of serious help.

Someone beheaded a statue of Jesus Christ in the courtyard of Good Shepherd Catholic Church in Miami’s West Kendall area sometime between the evening of July 14 and the morning of July 15, NBC Miami reported.

“This is an attack on the church,” Mary Ross Agosta, a spokeswoman for the Archdiocese of Miami, told the Miami Herald. “This is not only private property, it is sacred property.”

Someone sprayed the word “idol” on a statue of the Virgin Mary in Queens, New York.

Staff noted the desecration of the statue outside the Cathedral Prep School and Seminary in the Elmhurst neighborhood when they arrived for work July 10, WABC-TV (ABC7 New York) reported.

A man drove a van into Queen of Peace Catholic Church in Ocala, Florida.

The Marion County Sheriff’s Office wrote in a July 11 Facebook post that sheriff’s deputies responded “after receiving reports of someone setting fire to the sanctuary while several parishioners were inside preparing for a morning Mass.”

The sheriff’s office said a man identified as Steven Anthony Shields “had intentionally crashed a vehicle through the front doors of the church, exited the vehicle and poured gasoline out into the foyer area and then lit it on fire.”

Shields “then left in the vehicle,” the sheriff’s office said.

After catching him following a chase, sheriff’s deputies charged Shields with four felonies. He was jailed without bond.

“We praise God that no one was injured,” the Orlando Diocese said in a statement later July 11 to the Catholic News Agency.

“We join in prayer for Father O’Doherty, the parishioners of Queen of Peace Catholic Church, our first responders and the gentleman who caused this damage. May we come to know the Peace of the Lord.”

Someone apparently set a fire early July 11 that heavily damaged San Gabriel Mission, a Catholic church in San Gabriel, California, that is over 200 years old.

Investigators were still determining the cause of the fire, but noted that San Gabriel Mission recently had removed a statue of Junipero Serra, an 18th-century Franciscan priest, the Los Angeles Times reported.

Serra’s likeness has been a target of vandals who have been defacing and toppling statues and other historical monuments for the past two months.

Someone set fire July 11 to artificial flowers in the hand of a statue of the Virgin Mary at Saint Peter’s Parish Church in Dorchester, Massachusetts, The Hill reported.

“The image of Our Lady is so important for us and our faith. It’s such a contradiction to her love,” Currie told WCVB. “Mary would never desecrate anyone, never hurt anyone, only offer them the peace and love of Jesus. I think that’s where it really hits us in our hearts.”

Police arrested a man identified as Ian Crimi, 44, and charged him July 13 with damaging or knocking over five religious statues, including one of Jesus Christ and one of the Virgin Mary, at Sacred Heart Catholic Church in Punta Gorda, Florida.

This report was updated Aug. 3 to include another incident, for a total of eight.