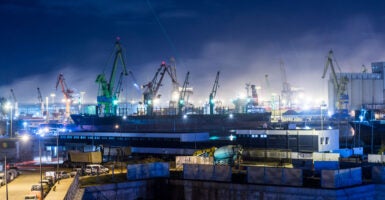 An agreement is in the works—albeit stalled by the pandemic—to improve intra-African trade. Pictured: A harbor in the Port of Casablanca, Morocco. (Photo: Youssef Rahmaoui/EyeEm/Getty Images)

Jamie Ramirez Hashem is an alumnus of the Young Leaders Program at The Heritage Foundation.

What would have been the world’s most extensive free trade zone since the formation of the World Trade Organization was supposed to go into effect July 1. Now, the COVID-19 pandemic has plunged the launch date into doubt.

The African Continental Free Trade Agreement is an ambitious attempt to reduce trade restrictions among all 55 member states of the African Union. But due to the pandemic—along with slow progress negotiating final details of the pact—the inauguration is indefinitely postponed.

That is unfortunate. COVID-19 has African economies reeling, making the delivery of the benefits of freer intra-African trade more urgent than ever.

Africa has one of the world’s lowest rates of intracontinental trade. Only 19% of its exports in 2018 were traded within the continent, compared to 69% and 59% for Europe and Asia, respectively.

The African Union projected that the African Continental Free Trade Agreement could change these dismal numbers by increasing regional trade by around 60% by 2022 (other projections were lower but still positive).

Freer trade helps to keep the costs of consumer goods and materials necessary for production low. It also promotes competition and spurs creativity. These are key drivers of general economic growth.

The U.S. would benefit as well. The agreement dovetails nicely with the Trump administration’s Africa strategy, which was unveiled at The Heritage Foundation in December 2018. A core goal of the strategy is to increase U.S.-Africa trade.

Some African countries would be able to produce more goods at a low enough price for American consumers to benefit, as well.

Finally, a more prosperous Africa would require less American aid. This is another bonus for the Trump administration, which hopes to make American aid to Africa more targeted and efficient.

As promising as the African Continental Free Trade Agreement is on paper, there is good reason to be skeptical it ever will live up to its potential, unfortunately.

Even before the new coronavirus struck, the agreement faced significant hurdles. Some of its specifics still have to be negotiated, such as rules of origin criteria and the schedule of tariff concessions.

Also, more countries must ratify the agreement if it is going to deliver the most benefits by encompassing the entire African continent. Thus far, only 28 African Union member states have ratified it fully.

Non-tariff trade barriers are likely to impede the agreement’s success, as well. One study estimates that such barriers bloat the cost of African trade by 283%—despite the fact that the average formal tariff rate across Africa is only 8.7%.

No wonder, then, that a 2019 report by the International Monetary Fund asserted that ameliorating non-tariff barriers, such as the continent’s subpar infrastructure and customs protocols, likely would do far more to increase trade than lowering tariffs would.

The African Continental Free Trade Agreement also could founder among the quarrels between African nations, such as the current tensions between Uganda and Rwanda that have intermittently closed their shared border to most exchange since February 2019.

That’s not to mention the trade disruptions that could arise from outright conflict; the continent currently is plagued by eight such clashes.

Finally, Africa is peppered with regional economic communities that seek to lower trade barriers. None has achieved its potential, which illustrates the challenge faced by the much more ambitious African Continental Free Trade Agreement.

Nonetheless, Africans and Americans alike should hope that African rulers overcome the COVID-19 disruption and other barriers to implement the trade pact fully. Doing so would be a positive economic development for Africa and the U.S. at a time when both regions sorely need it.