13 Images of the Chaos Created by ‘Violent Anarchists’ in Portland 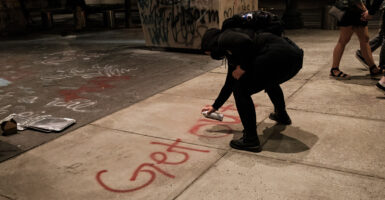 The U.S. Department of Homeland Security on Thursday released a chronicle of the recent violence, which began at the end of May in Portland and continues this week. “Violent anarchists” are responsible for the majority of the criminal activity, according to DHS.

Two frequent targets for rioters and vandals are the Mark O. Hatfield U.S. Courthouse and the Multnomah County Justice Center.

On July 1, a mob of “over 200 violent anarchists blocked access to the [courthouse] and proceeded to launch aerial fireworks at federal property,” according to the DHS timeline.

Chad Wolf, acting secretary of the Department of Homeland Security, said in a formal statement Thursday:  “This siege can end if state and local officials decide to take appropriate action instead of refusing to enforce the law. DHS will not abdicate its solemn duty to protect federal facilities and those within them. Again, I reiterate the department’s offer to assist local and state leaders to bring an end to the violence perpetuated by anarchists.”

But Portland Mayor Ted Wheeler, a Democrat, has voiced opposition to federal officers’ stepping in to control the violence.

Wheeler wrote last Tuesday on Twitter: “The best thing they [federal officers] can do is stay inside their building, or leave Portland altogether. Our goal is to end these violent demonstrations quickly and safely. And in the meantime, I asked [Wolf] to clean up the graffiti on local federal facilities.”

Here is a collection of photos showing the actions of vandals and rioters in Portland over the past seven weeks.