Our Government’s Unwise Stamp of Approval on Black Lives Matter 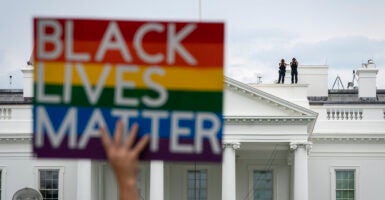 I have always believed that bureaucrats working on behalf of the American people should be visibly neutral politically. We shouldn’t know what their political ideologies are or what political parties they belong to or the causes they support.

This is not a partisan issue but an issue of public trust and the importance of neutrality among our civil servants. The Hatch Act of 1939—which, among several other statutes, grants power to the United States Office of Special Counsel—was supposed to accomplish this task but has failed to do just that.

This isn’t the first instance of the agency coming up short; a recent ruling from the agency is another step in the wrong direction.

The agency ruled that federal workers can show support for Black Lives Matter, and it even said that it’s OK for them to also fundraise for the group as long as they don’t back specific political candidates.

The ruling didn’t stop there; it went on to say that employees can “wear BLM pins, post supportive messages to their social media account during work time, or let fellow employees or members of the public know of their support.”

This is not the first time the Office of Special Counsel came to such a conclusion. It labeled the tea party a social movement and not a political one, the same designation it gave to Black Lives Matter.

However, is it fair to not categorize Black Lives Matter—or the tea party movement, for that matter—as a political movement? After all, were their ends not to impact the political climate by, in essence, supporting causes and individuals who could become candidates who share their visions and political aspirations?

The tea party as a movement had political objectives, and so does Black Lives Matter today.

I recognize the Office of Special Counsel has been consistent in its rulings. From my perspective, no form of participation should be permitted during work hours for political or politically leaning groups.

If people want to do whatever they want during their personal time, then that’s their business. But it should not be tolerated during official government time when taxpayer dollars are paying their salaries.

The Office of Special Counsel said that “both BLM and the tea party are blanket terms for a movement for social change and both span many groups,” which is partially true, but that does not negate the fact that their aim is a political one.

Taxpayers shouldn’t have to worry about federal government employees fundraising for or posting on social media about political or social movements rather than working on behalf of the American people.

Shockingly, our government can empower these organizations without any accountability or challenges from the press. Their actions remain under the radar.

We need to have complete confidence in our government, and a part of having confidence is knowing that government bureaucrats are apolitical creatures during their working hours. It’s important to know that, regardless of the political climate, they aren’t taking sides or using the influence of their positions in ways that may impact their work.

Support for Black Lives Matter, the tea party, and any other movement should be a private matter that occurs only in private time. In a country as politically diverse and charged as the United States, we must preserve the integrity of our institutions and the crucial role they play in working on behalf of all Americans, regardless of their political affiliation.

This is a task that is impossible if we are to permit forms of activism at work on the job. It sets the wrong example and creates a culture we should never want at any government agency.