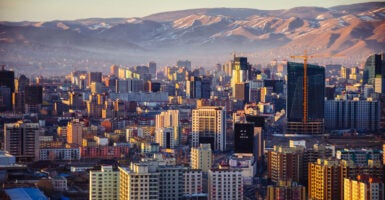 Landlocked between China and Russia, Mongolia has demonstrated a strong commitment to working closely with the United States on strategic issues. Pictured: The skyline of Ulaanbaatar, Mongolia’s capital city. (Photo: GML/Getty Images)

A Senate Finance subcommittee recently held a timely hearing entitled “Censorship as a Non-Tariff Barrier to Trade.” One of the witnesses, whose name may sound familiar, pointed out the potential in the U.S.-Mongolia relationship in countering the harmful effects of censorship on trade in the Indo-Pacific region.

Speaking to the subcommittee on international trade, customs, and global competitiveness, well-known Hollywood actor Richard Gere testified that Chinese censorship on industries, such as information and entertainment, acts as a non-tariff barrier to trade.

Gere, chairman of the International Campaign for Tibet, has long advocated for better treatment of ethnic minorities in China’s restive region.

In the hearing led by the subcommittee’s chairman, Sen. John Cornyn, R-Texas, and ranking member Sen. Bob Casey, D-Pa., Gere highlighted the increasingly important relationship between the U.S. and Mongolia.

He described the proposed bipartisan Mongolia Third Neighbor Trade Act, which seeks to deepen the U.S.-Mongolia trade relationship, as “a concrete way to strengthen democracy, workers’ rights, and free market capitalism in the region at a most critical time in the Indo-Pacific.”

Gere added that Washington can act in a practical way to “help Mongolia remain an independent democracy.”

As underscored by a recent report by the Republican Study Committee, the proposed bill would help expand U.S. trade with Mongolia by allowing duty-free entry of Mongolian cashmere into the United States and by facilitating the country’s economic diversification, making it a more valuable trading partner in general.

Mongolia, a nation of about 3 million people landlocked between China and Russia, has demonstrated a strong commitment to working closely with the United States on strategic issues, and has the potential to be an important geopolitical ally of the United States.

The country is 1 of 9 NATO “partner” nations, along with Japan and South Korea, in East Asia. Mongolia participates in United Nations global peacekeeping operations, and has more than 1,000 peacekeepers deployed in Africa.

When Mongolian Prime Minister Ukhnaagiin Khurelsukh visited Washington in 2018, the U.S. reaffirmed Mongolia as “an important Indo–Pacific partner” with which the U.S. would cooperate to provide “mutual support in their shared pursuit of a secure, stable, prosperous world of independent and sovereign countries.”

More recently, the State Department commended the people of Mongolia for exercising their unalienable right to vote in the parliamentary elections on June 24, noting that America is “proud to be Mongolia’s ‘third neighbor’ and strategic partner in ensuring peace and security in the Indo-Pacific.”

All in all, Mongolia’s government in Ulaanbaatar has maintained a constructive and forward-looking relationship with Washington. However, more can and should be done to enhance bilateral interaction.

In particular, the U.S.-Mongolia economic relationship needs to evolve from one largely based on aid and various types of technical assistance to a much more private-sector driven partnership.

A distinct trade component is critical to that end, and the proposed bipartisan legislation could play a practical role in ensuring Mongolia’s ongoing economic development by incentivizing targeted economic reforms.

Over the past 30 years, the United States and Mongolia have made the strategic choice to forge and defend a relationship based on “shared commitment to freedom, democracy, and human rights.”

That relationship can be an important source of strength for both countries.